Congratulations to PhD student Kimberley Birkett, who won the prestigious award for her poster ‘Modelling Cometary Sodium Tails’ at the AGU Fall Meeting 2013. 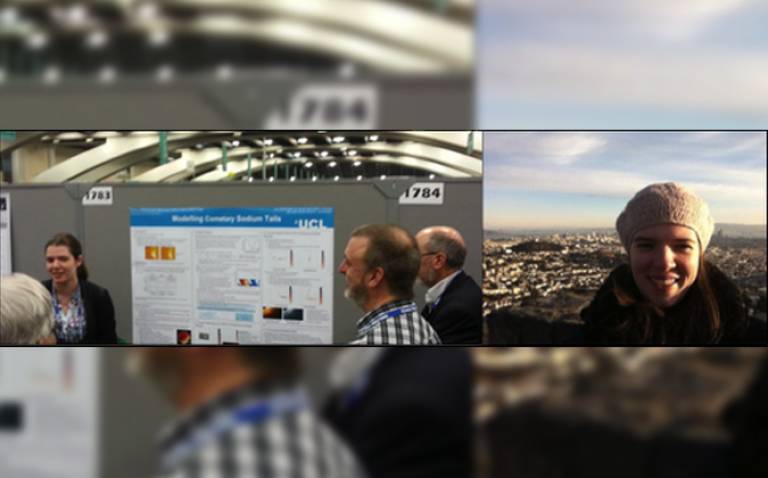 The American Geophysicial Union (AGU)'s Outstanding Student Paper Awards (OSPAs) are awarded to promote, recognize and reward undergraduate, Master’s and PhD students for quality research in the geophysical sciences. It is a great honour for young scientists at the beginning of their careers.

Kimberley says "Attending the AGU Fall Meeting was a great experience. I am very pleased that my enthusiasm for my subject came across whilst presenting my work and has been recognised by this award."

The poster that Kimberley presented at December's AGU Fall meeting in San Francisco discussed her work on the neutral sodium tails of comets. Neutral sodium tails are a third type of comet tail, distinct from the dust and ion tails usually observed, and their sources are not fully understood.

Kimberley adds "My work looks at constructing a computational model to explain the physics behind the formation of neutral sodium tails at comets and is the first to investigate the effect of the comet’s orbital motion on the structures seen in neutral sodium tails. If we can understand the processes responsible for generating these structures it should allow insight into key mechanisms that are occurring within the cometary environment and, as comets are the remnants of solar system formation, this in turn should help us to understand more about the conditions in the early solar system that resulted in a planet like the Earth."

She initally applied her model to measurements of the sodium tail of comet C/1996 O1 (Hale-Bopp) but with the excitement surrounding comet C/2012 S1 (ISON), she also adapted her model to predict what comet ISON’s sodium tail would look like. Unfortunately ISON did not survive its close approach to the Sun, but sodium was observed at the comet before it was destroyed and the results will be compared to her simulation results.

Kimberley now has her own personalised page on the AGU website where more information about her work can be found and her winning poster can be viewed.