SMILE is a joint space mission by ESA and the Chinese Academy of Sciences dedicated to study the boundary between the magnetosphere and interplanetary space using soft X-ray imaging.

The coupling between the solar wind and the Earth's magnetosphere-ionosphere system, and the geospace dynamics that result, comprise some of the key questions in space plasma physics. In situ measurements by a fleet of solar wind and magnetospheric missions, current and planned, can provide the most detailed observations of the Sun-Earth connections. However, we are still unable to quantify the global effects of the drivers of such connections, and to monitor their evolution with time. This information is the key missing link for developing a comprehensive understanding of how the Sun gives rise to and controls the Earth's plasma environment and space weather.

SMILE is a collaborative mission between ESA and the Chinese Academy of Sciences (CAS) that was selected in November 2015, adopted into ESA’s Cosmic Vision Programme in March 2019, is under development and is due for launch in 2024.

SMILE will carry two imagers and two in situ measuring instruments. The soft X-ray Imager (SXI) is being developed by the University of Leicester with contributions from MSSL and the Open University in the UK, and from institutions in Austria, Hungary, Spain, the Czech Republic, Norway, Ireland and China. SXI will observe the location, shape, and motion of dayside magnetospheric boundaries, including the bow shock, magnetopause, and cusp regions in the soft X-ray band. SXI is based on lightweight micropore optic technology and incorporates two large format CCDs as the X-ray detection elements. MSSL are responsible for the Front End Electronics which operates the readout of the CCDs and collects the X-ray signals to be processed and transmitted to Earth.

Simultaneous with the SXI observations, the UV imager (UVI) will monitor Earth's northern aurora to link the processes of solar wind injection into the magnetosphere with those acting on the charged particles precipitating into the cusps and eventually generating the aurora. The UVI will employ new filter technologies and an innovative telescope design to obtain UV images of the aurora even in sunlit conditions. UVI is being developed by the University of Calgary and the Canadian Space Agency with contributions from Belgium and China.

The magnetometer experiment (MAG) and the Light Ion Analyser (LIA) are being developed by the National Space Science Center in China with contributions from Austria, and the UK and France, respectively. The MAG scientific goal is to measure the orientation and magnitude of the solar wind and magnetosheath magnetic field while LIA will measure the solar wind and magnetosheath ion distributions and determine their basic moments such as density, velocity, temperature tensor, and heat flux vector.

The SMILE mission is a joint endeavour by ESA and CAS from beginning to end, from the proposal call, through the design and implementation phases, launch and operations, to the exploitation period of the observations (nominal mission duration is 3 years). Responsibilities are shared by the two agencies: China contribute the platform, the in situ instrument package and the ground operations after launch (with ESA contribution), while ESA are providing the payload module (the interface plate on which the imagers are mounted), integration and testing in Europe, and the launch, as well as the imagers via national contributions.

The spacecraft will be launched from the Centre Spatial Guyanais, Kourou. It is compatible with a launch on VEGA-C (single launch) and Ariane 6 (dual launch). After launcher separation in LEO, the spacecraft will then transfer to the final HEO science orbit using chemical propulsion. This orbit is highly elliptical with apogee at 20 Earth radii and a period of 51 hours, of which 40 hours are expected to be operational above the Earth’s radiation belts.

The SMILE project is now in Phase B, and construction of the Structural and Thermal Model of instruments and spacecraft is underway.

SMILE is a novel space mission that will revolutionise magnetospheric physics by providing simultaneous images and movies of the magnetopause, cusps, and auroral oval under the impact of the variable solar wind, for up to 40 hours per orbit continuously using state-of-the-art detection techniques. 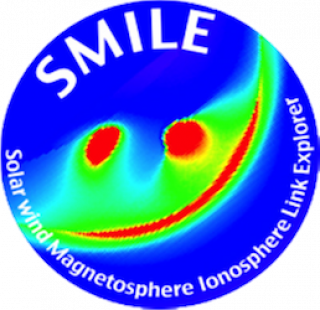 If you would like to register your interest in SMILE and become a supporter, please fill in your details here