We Are UCLMS - Dr Kwame Asante

Meet some of the alumni and student stars from our portrait exhibition in these in-depth profiles, looking at their journey to medical school and beyond! 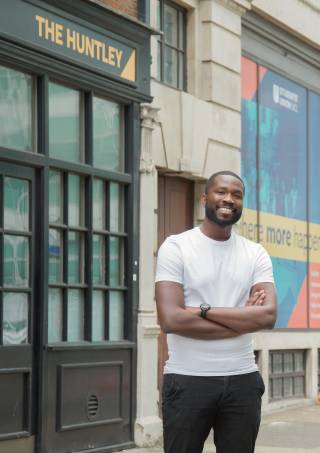 Kwame is a UCLMS alumnus who graduated in 2015. He now works as an A&E doctor in Birmingham, whilst also juggling a career in stand-up comedy.

He picked the Huntley as the background for his portrait as it was the setting of some of his favourite memories at UCL. He joined RUMS Rugby Club in his first year and enjoyed being able to wind down from medicine and having older years he could talk to about the course. His choice of the Huntley is a tribute to how much RUMS Rugby club was a big part of his support network at UCL. He enjoyed being president of the club whilst at medical school, but his favourite memory was their UH Cup win in 2015- the first time in 120 years! He now holds an honorary lifetime membership with RUMS Rugby, and enjoys going back for alumni days and end-of-year dinners.

With a former midwife mother, gastroenterologist father and little brother who is a doctor, you might be forgiven for thinking that medicine was the only path that Kwame would go down.

However, it was at UCL that he truly found his calling in comedy, with this vocation and his medical career taking off side by side. Kwame had always enjoyed watching comedy and telling jokes, but it wasn’t until Year 12 where, on a dare from a friend, he had a go at doing stand-up at the school talent show. At UCL, he got into the London open-mic circuit and started gigging regularly, often popping out to do a comedy gig before getting back in time for lectures. He won the UK Student Comedy Awards in 2012, which propelled his career and he hasn’t looked back since.

His penchant for story-telling clearly runs in the family: his grandad always had a long Ghanaian folk story to tell, and he describes his mum fondly as “quirky” and funny. His family weren’t always a fan of his gigs; in the early days they found some of his material a bit too “edgy”. Later on, as his style became cleaner and more refined, they were won around.

When asked about how he came up with material, it might surprise many to discover that he rarely talked about medicine during his gigs whilst at medical school. He felt quite able to keep both worlds separate, instead preferring to talk about his childhood, family and dating. He now admits though that medicine is creeping into his sets.

“Comedy is one of the highest pressure public speaking things that you can do. Once I’ve gone up on stage and done a set, presenting a case to a consultant is much easier!

Kwame describes how comedy is much more about taking risks and trying something new, because at the end of the day a comedian can go home and no major harm is done. This ability to try new things without anyone getting hurt is part of the reason he enjoys comedy so much.

Nevertheless, comedy is not without its drawbacks. Due to its competitive nature, there’s a need for a unique selling point in the comedy industry, and Kwame quickly felt that he was labelled as a “comedian doctor”, sometimes feeling pressured by this term. By the same standard, he admits that in his occupation as an A&E doctor, he doesn't immediately disclose that he is also a stand-up comedian, in order to avoid unwanted assumptions.

Kwame also puts a lot of thought into his public image, particularly regarding whether some of his material needs to be censored because of possible conflicts with what the General Medical Council expects of doctors. Having to check yourself when you say something off the cuff can certainly make improv comedy hard, and this is part of the reason why Kwame prefers pre-scripted sets.

Even so, Kwame is committed to both his career in medicine and his comedic calling. After spending the first 25 years of his life in London, he is now based in Birmingham which he considers “big and busy enough, and close enough to London.” He sometimes finishes his A&E shifts, jumps on a train to London to perform a gig, before returning to Birmingham for work the next day!

He’s still finding the best way to balance the two, but so far it is going well. He knows he may have to pick between them as his comedy career takes off, but for now he is enjoying the fact that his two great interests allow the expression of two very different sides of him.

For current students at UCL Medical School, he emphasises the importance of making sure they slow down and enjoy the experiences more. “You do have to work at medical school,” he says, “but appreciate the down-time and life without the full responsibilities and the admin work - definitely live that student life.”

Find out more about Kwame's comedy on his website kwamedy.com