The Olden Collection consists of around 1000 works on German political and economic history, from the 1870s to the end of the Second World War. The titles, published mainly in the 1920s and 1930s and mostly in German, cover the German Empire and Bismarck, the First World War and its causes, the German 1918 Revolution, the Treaty of Versailles, the Weimar Republic, the rise of the National Socialist German Workers' Party and the Third Reich. The works include detailed analysis of German and European politics and ideologies of the inter-war years and histories of German political movements, particularly socialism and National Socialism. Many of the works contain the inscription of Rudolf Olden (1885-1940), journalist and lawyer.

This collection was acquired by UCL (along with some archival material) in 1948. Rudolf Olden was an author of works on Hitler and Nazism. After his experiences in the First World War, Olden began writing for a pacifist newspaper in Vienna and successfully defended the editor of a newspaper, one of whose authors had been indicted for slandering the German army by calling soldiers 'murderers'. Titles in this collection written by Olden include a biography of Hitler translated into various languages, Hitler, the pawn, published in 1936; The new organisation of the German army (1935); Hindenburg, oder, Der Geist der preussischen Armee (1935), and various editions of works about Gustav Stresemann.

This collection is fully catalogued. To browse the records, conduct a shelfmark search for OLDEN COLLECTION on Explore. 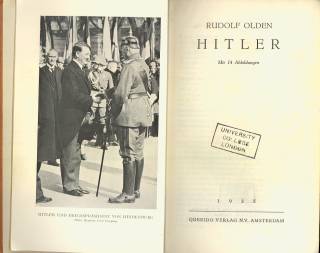