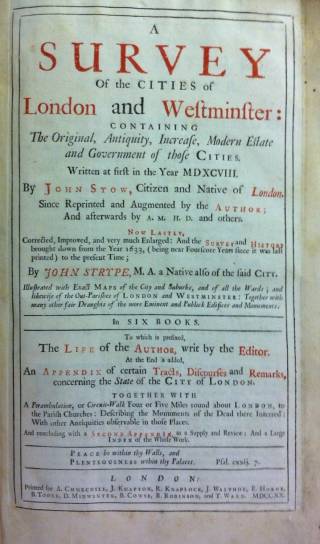 A collection of around 3000 volumes, 500 maps, and many pamphlets on the topography, architecture, and the social and economic history of Greater London. There are 9 STC, 36 Wing, more than 300 18th-century English imprints, and 500 early to mid-19th-century items. Tract collections of the 18th and 19th centuries include 10 volumes from the Ward bequest (‘Ward Tracts’) and 12 volumes from the London Institution (‘SOS Tracts’). There are around 200 volumes of the histories of the City livery companies.

The collection originated with a bequest of around 700 volumes received in 1873 from the executor of Captain Henry Ward (1823-1867) and became a separate library in 1922. It was further augmented in 1945 by a large collection of books and pamphlets from the library of Miss E. Jeffries Davis who was Reader in London History at UCL from 1914 to 1940.

This collection is partly catalogued. To browse the records, conduct a search for LONDONHISTORY, without spaces, on Explore.

Image: John Stow, A survey of the cities of London and Westminster: containing the original, antiquity, increase, modern estate and government of those cities written at first in the year MDXCVIII (LONDON HISTORY FOLIOS 1720 STO)