102 editions of Il libro del cortegiano, the courtier’s etiquette and morality book by Renaissance Italian author Baldassare Castiglione. This is one of the most complete collections of editions of the work known to exist, with items dating from the first edition of 1528 to the 20th century. 70 date from before 1800, 62 from before 1640. These include all five early Aldine editions – 1528, 1533, 1541, 1545 and 1547 – as well as a 1557 edition, published in Paris by E. Graulleau, that does not appear in L.E. Opdycke’s 1902 Castliglione bibliography, in a copy signed and once owned by William Lambard. Other highlights include a 1541 copy owned and annotated by Gabriel Harvey, poet and friend of Edmund Spenser; the first English version, translated by Thomas Hoby and printed in 1561; nine other English editions printed before 1640; and Opdycke’s translation which appeared in a limited edition in 1902 together with Opdycke’s bibliography of Castiglione publications. 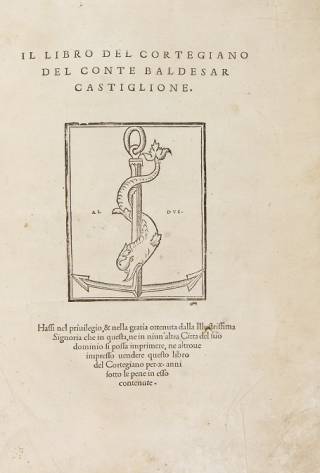 The collection was established from the gift of Sir Herbert Thompson’s books in 1921. It was later enlarged from other collections, in particular the library of Huxley St. John Brooks, whose books were purchased by the Library on his death in 1949.

The collection is fully catalogued. To browse the records, conduct an advanced search for ‘Author / creator - contains - Castiglione’ on Explore and limit results to ‘Physical items’ and ‘Special Collections’.