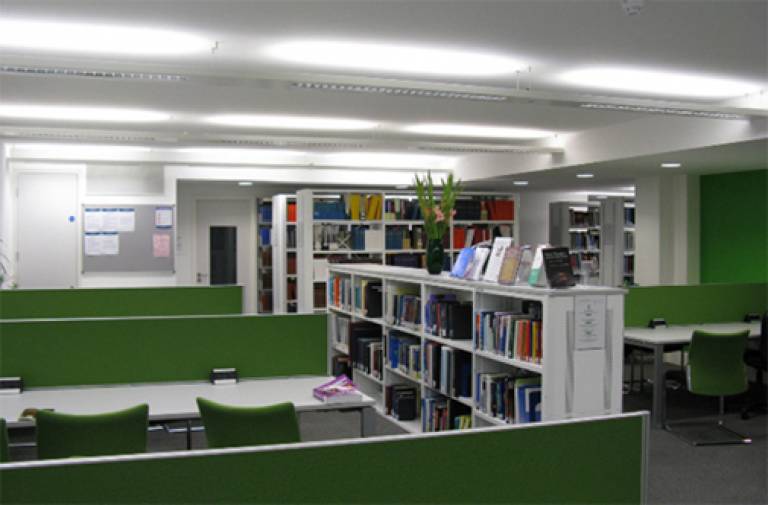 The HCS Library started life in the 1970s as the Library of the National Hospital [of Neurology]'s College of Speech Science (NHCSS), which became UCL's Department of Human Communication Science in 1995. By this time the Library had become established as the National Information Centre for Speech-language Therapy (NICeST), in recognition of its unique specialist collections.

Since 1985 the NHCSS/HCS Department and Library had been located at Chandler House, a 19th century hospital building which was originally built for the Royal Free. The Library occupied the former mortuary and dissecting theatre on the 2nd floor, which, although dramatic with its high glass roof and spooky atmosphere, was hardly conducive to comfortable studying; it froze in winter and became a tropical greenhouse in summer. The rest of the building was similarly unsuitable to house the top class 21st century teaching and research establishment that the HCS Department had become. Generous funding was eventually secured from the Government's Science Research Infrastructure Fund (SRIF), and from UCL Estates & Facilities, to transform the grade 2 listed building for modern academic use.

Architects A-EM were appointed to this task, and worked closely with members of HCS staff, including the Librarian Stevie Russell, on the plans. The Library was completely re-designed from scratch, replacing the old, makeshift arrangement with a modern, purpose-built work and study space. The extent of the refurbishment - which involved gutting most of the interior of the building whilst keeping the exterior intact, and adding a new 3rd floor and roof above the Library - was such that all occupants had to be evacuated for the duration. In July 2006 HCS relocated to cramped but adequate premises in Remax House, Alfred Place WC1, allowing the building works to commence in earnest.

Two years later the project was complete and the Library returned to Chandler House in June 2008. The intervening years had also seen major developments in UCL's Faculty of Life Sciences, which had undergone a substantial reorganisation. The HCS Department had merged with the Departments of Psychology and Phonetics & Linguistics (P & L), to form the new Division of Psychology and Language Sciences. Chandler House was now home to the former P & L department as well as most of the former HCS Department, which together formed Language Sciences at UCL. The role of the Library had changed accordingly: it now collected materials in phonetics and linguistics subjects as well as speech and language therapy. Some of the books and journals from the UCL Main Library's linguistics collections were relocated to the new Library at Chandler House, but the bulk of these remained in the South Junction reading rooms of the Main Library. All new resources in these subject areas, however, are now being held at Chandler House.

In view of the above developments, the Library changed its name when it moved to the refurbished premises. The Human Communication Science Library closed at Remax House on Friday 6 June, and re-opened at Chandler House as the UCL Language & Speech Science Library on Monday 16 June. The new Library's greatly enhanced facilities included a bright and welcoming reading room, a separate room for group study, and computers for student use. The building work had also uncovered a previously hidden window with a charming view to the Chandler House courtyard below, around which a small, lounge-style area for more relaxed reading was created. The Library was also open on Saturdays, in UCL term time, for the first time that year.

The Language and Speech Science Library proved extremely popular with staff, students and visitors, and since the start of term it had been serving approximately twice as many users as in previous years. Those who remember the draughty old Library were delighted to see the transformation brought about by the Chandler House refurbishment programme.