A collection of around 150 fragments of medieval and early modern manuscripts.

The fragments are mostly recovered from the bindings of other manuscripts or early printed books where they had generally been used as pastedowns or outer coverings. The earliest item dates from around the 4th century AD, but the majority of the collection dates from the 7th to 17th centuries. A variety of languages are represented, predominantly Latin, but including French, English, German, Greek and Hebrew. 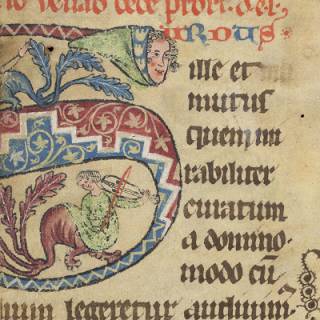 The origins of some can be traced to Germany, particularly fragments of music that have distinctive German or Bohemian notation. Other fragments have German annotation or relate to German places. A small number of texts such as fragments of works by Justinian are mostly of Italian origin and they may have been sourced from Bologna, where the university was a centre of legal studies in the medieval period.

Many of the fragments were purchased by Professor Robert Priebsch (Professor of German at University College London, 1898-1931) at a sale in Bonn in the early 1920s in order to give students practical experience of palaeography. It is not known precisely how many were purchased by him, or the provenance of the other fragments.

A full catalogue of the fragments can be found on the UCL Archives Database.

Two fragments have recently been used for workshops in the DEMMF series. The aim of these workshops is to produce a digital online edition of an item, and these will be available through the DEMMF website soon. See the Digital Rolls and Fragments website for further information.

The Centre for Digital Humanities, The Department of Medical Physics and Bioengineering and Library Services worked together on a research programme aimed at developing new imaging techniques for recovering text in deteriorated historical manuscripts.