Personal papers of Moses Gaster, consisting of some 170,000 items.

A Window on the Social, Cultural and Political World of Rabbi Dr Moses Gaster 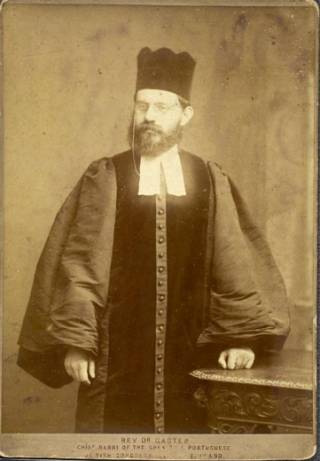 Moses Gaster (1856-1939) was a Jewish communal leader, prominent Zionist and prolific scholar of Rumanian literature, folklore, and Samaritan history and literature, as well as Jewish subjects. Born in Bucharest, he was expelled from Romania in 1885 because of his political activities. He settled in Britain and was appointed Haham (spiritual head) of the Spanish and Portuguese Jewish community, and later also Principal of the Judith Lady Montefiore College in Ramsgate. He was a founder and president of the English Zionist Federation, and played an important role in the talks resulting in the Balfour Declaration of 1917.

His personal papers, consisting of some 170,000 items, were given to UCL in 1974. Among them is a large collection of ‘ephemera’, dating from the 1880s to 1930s, including invitations, menus, visiting cards, greetings cards, and programmes. They shed a fascinating light on Gaster’s social and communal activities and on Anglo-Jewish life in the late 19th and early 20th centuries. They will also be of interest to those researching their family history. Many of the individuals and families mentioned also corresponded with Gaster and these letters are also held at UCL Special Collections. In addition to the ephemera, to mark the centenary of the Balfour Declaration, we have digitised items from the Gaster Papers that detail his role in this milestone in the history of Zionism

Please refer to our Special Collections web pages for information about how to access material from the Gaster Papers and read more about Gaster.