A brief history of UCL Library Services, dating back to 1827 when the first UCL Librarian, Revd Dr Francis Augustus Cox, was appointed a year after the University was founded at Gower Street. 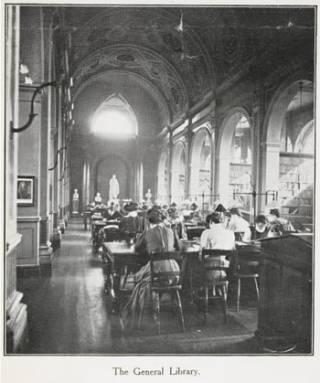 The first UCL Librarian, Revd Dr Francis Augustus Cox, was appointed in 1827, a year after the University was founded at Gower Street. The earliest library opened in the Wilkins Building just over a year later.

The first purpose-built General Library opened in 1849 and was later re-named after the Professor of Architecture who designed it, Thomas Leverton Donaldson.

In 1907 the Library expanded to take up the whole length of the first floor of the Wilkins Building and became the Main Library, still very popular with students today and often appearing in films and television programmes.

The Main Library primarily holds collections in the Arts & Humanities, and there is an equally large Science Library close by in Malet Place, in a building named after DMS Watson, Jodrell Professor of Zoology 1921-1951.

Following further expansion over the past century we now have 16 libraries supporting UCL's teaching and research, and a number of them provide services to both UCL and the NHS.

The Cruciform Hub is located in the former North London Hospital on Gower Street designed by Alfred Waterhouse. It holds the combined collections of the former Clinical Sciences Library, and the Boldero Library which was attached to the Middlesex Hospital. Reading Medicine traces the development of these libraries up until they were merged in 2005.

The award-winning SSEES building in Taviton Street houses our School of Slavonic & East European Studies Library, and close by on Upper Woburn Place, our extensive Architecture & Town Planning collections can be found in the Bartlett Library in Central House.

The Institute of Archaeology Library was founded in 1937 and is one of the best archaeological collections in the world.

We now also manage spaces beyond our libraries such as the Senate House Hub and the Graduate Hub, and appointments can be made to view our world class Special Collections, a rich source of manuscripts, archives and rare books.

Older material may be held in our Store in Wickford, Essex, and the team there sends requested material to our libraries on a daily basis.