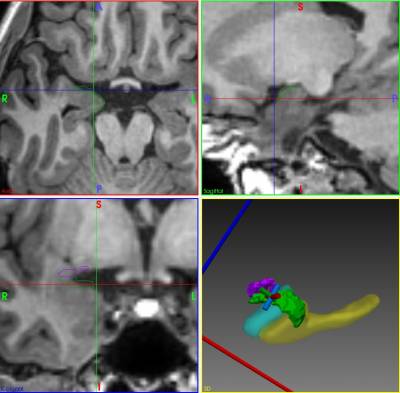 Removal of the temporal part of the piriform cortex greatly increases the chances of seizure freedom after temporal lobe resection for temporal lobe epilepsy. The part to be removed is shown in green in the orthogonal 2D  and 3D images. The part indicated in purple is in the frontal lobe and needs to be left intact.  These data are uploaded to the neurosurgical navigation system to guide the surgery.

Interictal epileptic activity and onset and propagation of ictal activity detected in SEEG may then be displayed in 3D, overlaying the multimodality imaging data so that the relationship between sites of onset and propagation of epileptic activity with normal and abnormal anatomical structures and functional abnormalities is evident. Ongoing work includes automated spike detection so that the occurrence of varied spike populations may be displayed in 3D density maps. Our next objective is to display derived EEG parameters in 3D including high frequency ripples, gamma power and epileptogenicity index.  These data inform the EpiNav Resect planning module, with seed growing algorithms from SEEG contacts involved in seizure onset and early spread, constrained by the simultaneous display of eloquent cortex (fMRI) and critical white matter tracts (eg optic radiation, arcuate fasciculus, cortico-spinal tract). For cases in which conventional surgical access to the epileptogenic zone would cause morbidity, we have devised the EpiNav Ablate module for planning optimal trajectories for Laser Interstitial Thermal Therapy. This method will be directly applicable to intracerebral delivery of vectors for focal genetic modification, drug delivery, lesioning and stimulation.

To date, planned and implemented trajectories have been straight line of sight. We are now beginning work on nonlinear trajectories and appropriate delivery methods to target brain areas that are not otherwise accessible.

Identification of the piriform cortex as a key area to be removed in temporal lobe resections been demonstrated and we have developed methods to identify this in individuals going for surgery, so that the chances of seizure freedom are increased.  In parallel we have pioneered methods to highlight critical nerve pathways in the brain so that damage to these may be averted in surgery – see more below. We have shown that protecting the optic radiation can preserve a patient’s vision , which used to occur in up to 20% of cases. We are currently exploring if pathways involved in language are damaged in surgeries and if they cause difficulties in language function in patients after surgery, as reported in 30-50% of cases.

Two fibre bundles involved in language at risk of damage during temporal lobe epilepsy surgery: arcuate fasciculus (left), inferior fronto-occipital fasciculus (right) are damaged in this example, with the resection indicated in red.

Planning implantation of intracranial electrodes to locate source of epilepsy

A) Anatomy-driven multiple trajectory planning strategy, with target and entry points for the trajectory specified by the user. 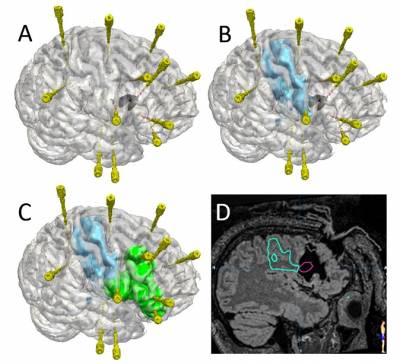 A) Right hemisphere implantation with region of the thickened grey matter deep to the pars opercularis of the inferior frontal gyrus (black). SEEG implantation with electrode contacts active at the seizure onset shown in red.

Hippocampal sclerosis is the most common form of pathology in subjects with temporal lobe epilepsy, and has very good outcomes after surgery. We have developed hippocampal segmentation and analysis tools  that automatically provide quantitative information about the MRI appearance of the hippocampi to the radiologists when they review the scan. This information is presented as part of a pdf-report we have created and integrated with the hospital system, and has shown to improve radiological detection in a multi-centre multi-rater clinical study. This tool is also available as a web-service. 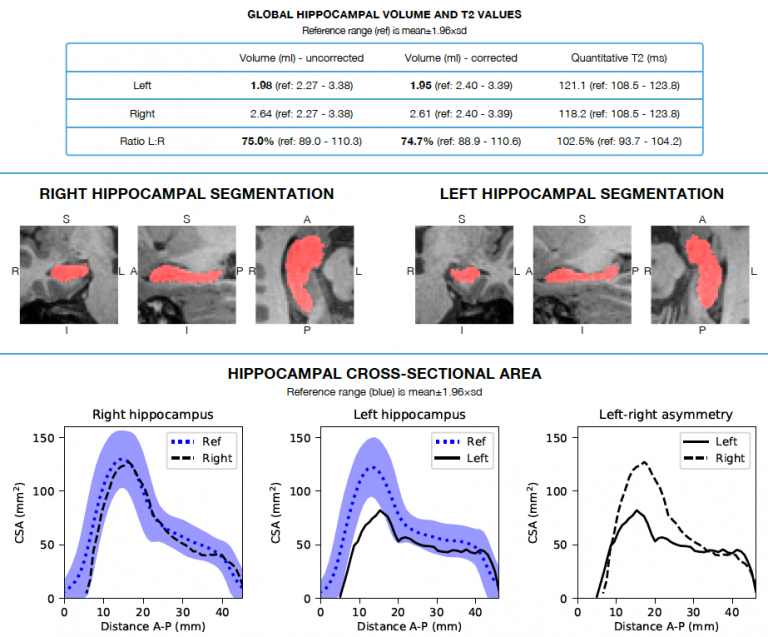 Example of the automated quantitative report for a patient with left hippocampal sclerosis. Report shows reduced volume which is predominantly at the anterior part of the hippocampus

Identifying focal abnormalities that underlie refractory epilepsy is crucial in the consideration of epilepsy surgery. We have created a multivariable AI based program to identify covert abnormalities in individuals who are considering surgery and validating this with the sites of seizure onset in individuals having intracranial EEG at NHNN.

Detection of covert cerebral abnormalities in MRI-negative, medically refractory, focal epilepsy using contemporary machine learning approaches. In the case shown, detected lesions were located in the right temporal and frontal lobes, which was in concordance with the results of scalp EEG (right frontotemporal involvement), neuropsychology (frontal involvement), and FDG PET imaging (right frontotemporal hypometabolism). A right frontal lobe resection was carried out after stereo EEG, and seizure-freedom post-surgery was achieved. 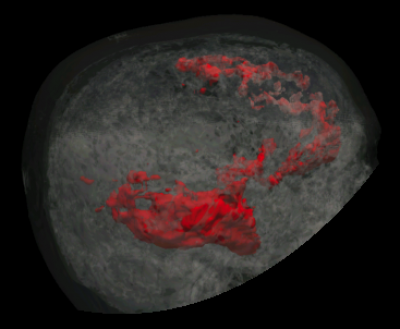 We have used serial MRI to demonstrate the accelerated thinning of the gray matter of the brain over years in individuals with  epilepsy, indicating the progressive effects of epilepsy on the brain, and establishing this method as biomarker for determining the effects of disease-modifying medications.

We will use retrospective data from the largest surgical database in the UK to develop and train a fully-automated high-dimensional hippocampal morphological pipeline with machine-learning techniques. Our aim will be to support prediction of surgical outcome in patients undergoing presurgical evaluation. We will train and test machine learning models on hippocampal surface shapes to predict long-term seizures and cognitive outcome. We will develop a fully-automated pipeline to generate hippocampal morphology reports with machine learning outcome predictions.

In the case shown, the patient had refractory focal epilepsy, and the MRI was reported to be normal. We not only detected the left insula (though it looked normal on MRI) which was clinically suspected to be involved in seizures but also found an additional, possible right amygdalar/hippocampal involvement. This is so important because it will increase the odds of achieving seizure freedom following a prospective surgery. 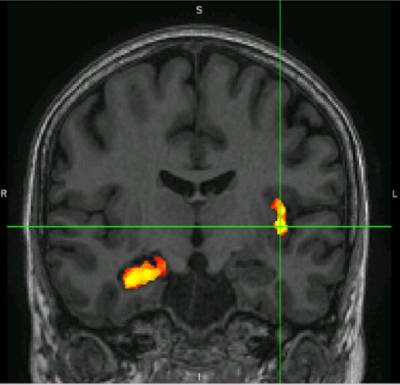 Sudden unexpected death in epilepsy (SUDEP) is one of the top ten causes of premature death in the UK and sudden death is 24 times more likely to occur in people with epilepsy than the general population. A death is classified as SUDEP when a traditional post-mortem examination does not reveal the cause of death.

We aim to perform post-mortem MRI scans in patients who potentially died from SUDEP, as well as provide a service for people who prefer not to have scalpel post-mortems for their loved ones,

In a pilot study, we will scan subjects prior to traditional autopsy examination who meet the criteria of having probably died of SUDEP. We will compare post-mortem MRI with MRI studies performed before death in these individuals, if available.

Our ultimate aim is to compare post-mortem MRI findings to traditional autopsy examination. We will determine the circumstances (age, time since death) and MR protocol, under which post-mortem MRI studies are as effective as traditional post mortem studies in correctly identifying SUDEP as the cause of death. We will develop a standard protocol for these studies that may in the future negate the need for traditional post mortem/autopsy under certain circumstances.

Depression, with a median prevalence of 30%, is a frequent comorbidity of epilepsy, with detrimental effects on quality of life often greater than those of seizures. Compelling evidence, both from animal and human data, identifies neuro-inflammation as a common pathological mechanism of epilepsy and depression. Several models of acute seizures and chronic epilepsy are associated with activation of microglia, inflammatory cytokines and blood brain barrier (BBB) dysfunction.

We will assess the relationship between neuro-inflammation and depression in epilepsy by employing multimodal imaging techniques, including Dynamic Contrast Enhanced (DCE)-MRI. DCE-MRI is a novel imaging marker, which calculates the dynamics of signal change following contrast agent injection. In humans, DCE-MRI detects BBB dysfunction with high sensitivity during the peri-ictal state, in individuals developing epilepsy after stroke and TBI, as well as in non-lesional epilepsy cases.

We aim to identify MRI biomarkers of epileptogenesis,  targeting development and progression of epilepsy. In the future, biomarkers detected through this investigation may inform the development of novel therapeutic strategies, such as the use of anti-inflammatories, potentially providing more effective and targeted treatment for patients with new-onset and chronic epilepsy

Adverse effects of AED play an important role in treatment failures, are associated with morbidity and mortality, and can considerably affect quality of life. Moreover, AEDs are considered to have an overall negative effect on different cognitive functions.

We will better understand the mechanisms of drug-induced cognitive disturbances in the common focal epilepsy syndromes, and so to identify patients at low or high risk of developing cognitive AED side-effects. We will assess the value of drug-induced fMRI responses to predict adverse effects by investigating changes in cognitive activation, resting-state fMRI patterns before and after addition of specific AEDs (Brivaracetam, Levetiracetam) in patients with focal epilepsy syndromes. Our research is intended to promote a methodology for the prediction of cognitive improvement or psychiatric and behavioural side-effects. Such tools will be important to inform the prognostic assessment of patients who have developed epilepsy and to develop individualised interventions aimed at promoting recovery.

Antiepileptic medication may impair cognitive function such as memory and language. Cognitive fMRI shows the functional anatomy of these effects. 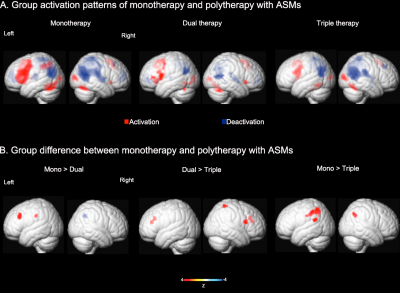 Cognitive difficulties are a significant comorbidity in people with epilepsy. Epilepsy surgery may be a suitable treatment option in some people however in up to 40% of people with epilepsy arising in the speech dominant hemisphere, there is worsening of language and memory functions thatcan significantly impact of quality of life. 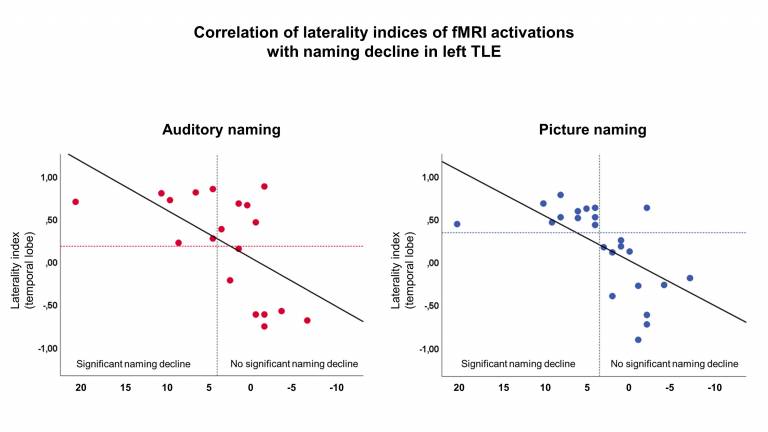 We have created and adapted memory fMRI paradigms to localise memory functions in people with epilepsy and have shown a method of using memory fMRI to predict memory decline after epilepsy surgery. We are now testing this prediction algorithm prospectively. Additionally, we are looking at connectivity analysis to see if looking at how the brain is connected may improve the sensitivity of prediction. 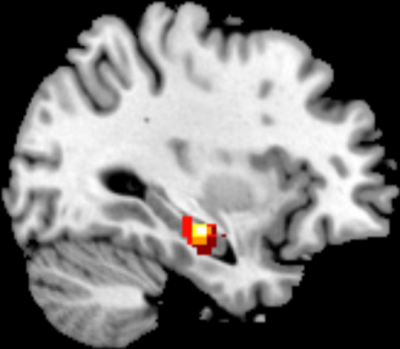 In a link with the EpiNav program we are visualizing the white matter tracts in the brain with tractography and using this information in the planning of neurosurgery, to mitigate the adverse effects on language.

Left temporal lobe epilepsy: A later age at onset of epilepsy onset is associated with stronger (yellow) and weaker (blue) functional connectivity of memory fMRI, from the left temporal lobe (green). This indicates how years of epilepsy affect the brain networks used for memory.