UCL Queen Square Institute of Neurology held its fourth inaugural lecture evening of 2021, on 7th September 2021, which was joined by over 100 UK and international attendees from Switzerland, Bangladesh, Austria, Georgia, Italy, Netherlands, Nigeria and United States. The first lecture was given by Professor Martina Callaghan (Professor of MRI Physics, Imaging Neuroscience) on “Protons and People”.

The two halves of the title relate to the importance of protons in MRI research, and the people who have inspired her throughout her career. Martina's interest in MRI research began when she was at the University of Limerick, where reading about functional imaging research led to her visiting the Nathan S Kline Institute of Psychiatric Research. Following her degree, Martina met Jo Hajnal at Hammersmith Hospital, and began a PhD at Imperial College London, working with David Larkman. Her postdoc work focused on measurement and modeling, and after travelling, in 2012 she joined the Wellcome Centre for Human Neuroimaging (WCHN), working with Nik Weiskopf, Siawoosh Mohammadi, Antoine Lutti and Zoltan Nagy.

Martina's work at WCHN began with inter-individual differences in ageing, and other examples of in-vivo histology using MRI (hMRI). In 2016 she succeeded Nik Weiskopf as Head of Physics, and was supported by colleagues Cathy Price, Eleanor Maguire and Gareth Barnes, including the renewal of the Centre's Wellcome status in 2016. 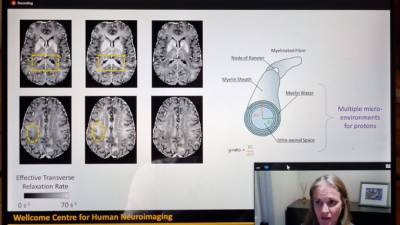 Martina became Deputy Centre Director in 2019, installing a state of the art 7T scanner in May 2019, dramatically increase the sensitivity and specificity of neuroimaging at WCHN. The Centre’s first studies using the scanner have reached completion. Martina’s work has benefited from extensive fruitful collaborations with an array of both internal and external researchers.

"Special thanks to all of my Queen Square colleagues, past and present - I have benefited greatly from working and having fun with them". Professor Martina Callaghan (Professor of MRI Physics, Imaging Neuroscience) 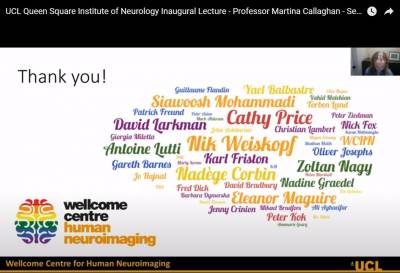 The second lecture was given by Professor Vincenzo Libri (Professor of Translational Neurology, Neuromuscular Diseases) entitled “A journey through clinical trials and beyond: Innovation or lost in translation…? " 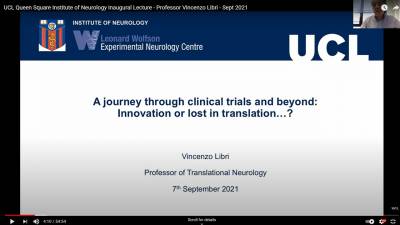 An early inspiration for Vincenzo was Alcmaeon of Croton, and following his degree, Vincenzo's aim was a career combining clinical pharmacology and translational neurology. Following a lectureship in Rome, Vincenzo joined the School of Pharmacy in 1990, where his postdoc fellowship focused on in-vitro electrophysiology and the mechanisms of neuronal excitability and learning and memory processing. In 1998, Vincenzo joined Glaxo Wellcome, to pursue his interest in clinical trials, and in 2003, he worked with the Headache Group at the UCL Queen Square Institute of Neurology. His work focused on markers and their correlation with disease progression, e.g. amyloid PET imaging. In 2008, he took a significant role as Head of Clinical Studies at NIHR Imperial Clinical Research Facility, supported by Professor Martin Wilkins. Vincenzo's work included neuropathic pain and sensory testing, and nicotinamide in Friedrich's Ataxia.

In 2013 Vincenzo became Head of the Leonard Wolfson Experimental Neurology Centre (LWENC), which opened in 2014, and developed a portfolio of innovative trials including ASO therapeutic, including in Motor Neurone Disease for which he is Principal Investigator. Vincenzo also launched the MRes in Translational Neurology in 2014, and in 2016 he became Director of the merged NIHR UCLH Clinical Research Facility, overseeing the whole portfolio of clinical trials.  Vincenzo's recent work has focused on COVID vaccine trials, involving more than 2,000 participants, including Oxford-AstraZeneca pivotal vaccine trial, Covid-Flu combinations, Covid vaccine boosters and other trials. This contribution has been acknowledged by the Government Scientific Advisor and UK Vaccine Task Force. 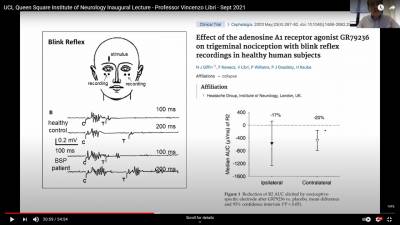 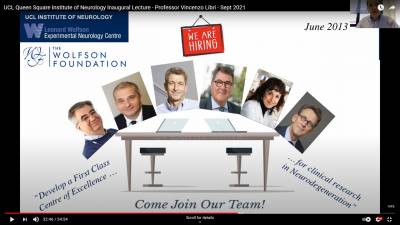 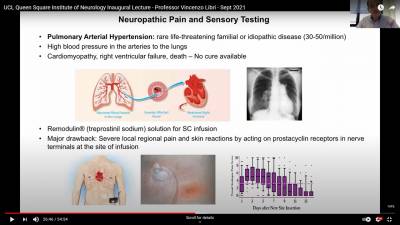 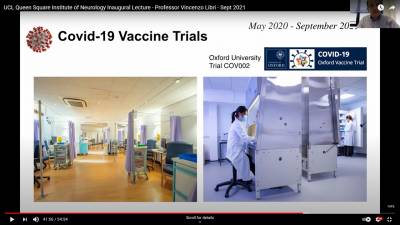 "It is an honour and a privilege to be part of the ION community and I would like to thank all and everyone for their continued support and friendship over the years"  Professor Vincenzo Libri (Professor of Translational Neurology, Neuromuscular Diseases)

Professor Michael Hanna introduced the speakers and votes of thanks were given by Professor Cathy Price (Head of Department, Imaging Neuroscience) and Professor Martin Wilkins (Vice-Dean Research at Imperial College London) respectively.