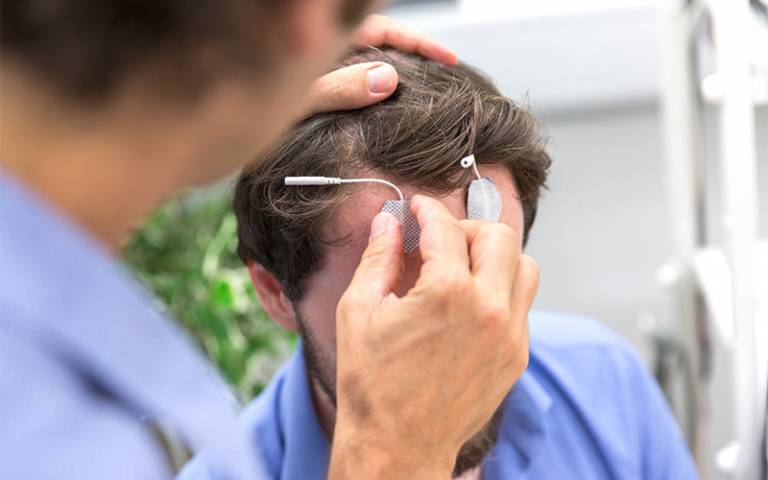 In a paper published in Nature Communications, the scientists report their new way of suppressing the brain waves underpinning tremors, without the need for invasive techniques.

Joint first author of the paper, Dr Sebastian Schreglmann (UCL Queen Square Institute of Neurology) said: “Tremor is a very debilitating symptom in some of our patients. Unfortunately, currently available treatments provide relief only in a proportion but not all patients. We hope that if our new technique proves successful in larger trials, it could be developed into a safe and effective therapy for more of our patients.”

Tremors, a common feature in a range of neurological conditions, can be severely disabling, causing involuntary shakes affecting the hands, head, legs or other body parts. The movements are thought to be the result of rogue brain waves – or aberrant oscillations – in regions associated with motor functions. But their underlying cause is still largely unknown, making it difficult to treat symptoms with drugs.

In severe cases, brain surgery may be an option, but this is invasive, not widely available and carries risks.

In a small study, the researchers developed a way of calculating and tracking the phase of these rogue brainwaves in real time – showing the synchronised peaks and troughs of activity as they ripple through the brain.

They then used a non-invasive form of electrical stimulation to target the cerebellum – the region at the back the brain which coordinates movement.

They found that by synchronising the brain stimulation with specific phases of these aberrant oscillations, they were able to reduce tremors in people with Essential Tremor Syndrome (ETS), the most common neurological disorder to cause such tremors.

Eleven people with ETS were given the treatment by applying electrodes to the scalp, arranged to maximise the electric fields in the cerebellum. The electric fields were adjusted in real time to maintain a fixed phase corresponding to the ongoing tremor movement, called ‘phase-locking’.

The team found the reduction of symptoms lasted during stimulation and for a short period afterwards. The reduction in the tremor amplitude (or severity) was associated with a disruption of the regularity of the movement, meaning the more the brain stimulation made the tremor irregular, the more it reduced its amplitude.

The team hopes that this discovery will pave the way for possible long-term treatment of tremors and other symptoms in people with other brain conditions that involves aberrant synchronous oscillations.

The researchers developed a way of calculating and tracking the phase of these rogue brainwaves in real time – showing the synchronised peaks and troughs of activity as they ripple through the brain.

Dr Nir Grossman (Imperial College London and UK Dementia Research Institute), who jointly led the research with UCL’s Professor Kailash Bhatia said: “Tremor symptoms can be upsetting and get in the way of doing basic, everyday things that most of us take for granted. In the worst cases, they can be severely debilitating.

“Our work presents an early-stage feasibility study of this approach. We hope to continue to develop it into a widely available treatment for tremors, as well as other symptoms that are underpinned by abnormal synchronisation in the brain.”