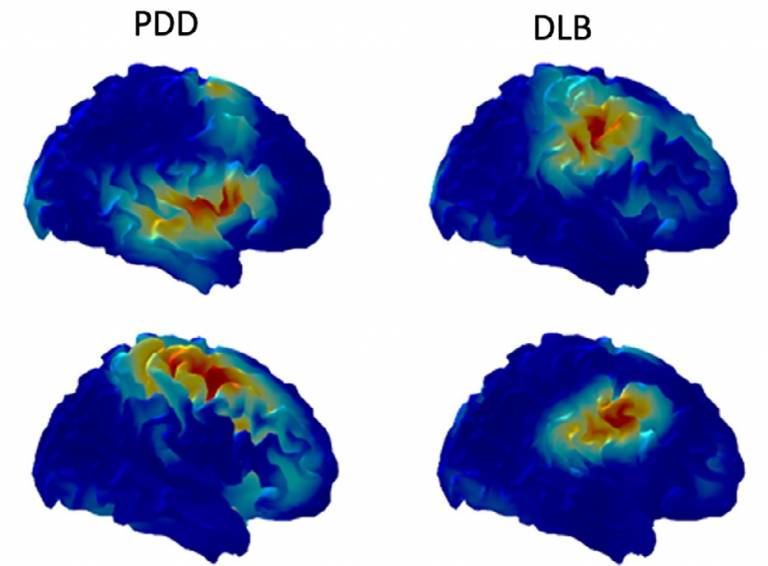 Dementia with Lewy bodies (DLB) and Parkinson’s disease dementia (PDD) are two of the most common neurodegenerative dementias. The two conditions share similar clinical features, characterized by prominent cognitive impairments together with motor parkinsonian symptoms and psychiatric problems. The common pathological hallmark of both conditions is the presence of Lewy bodies in the brain (tangles of the alpha-synuclein protein), often observed together with Alzheimer’s-type pathology. Despite these similarities, significant differences exist in the timing and severity of motor and cognitive symptoms, with PDD overall associated with more pronounced motor symptoms (e.g., tremor), and DLB associated with greater and faster cognitive decline. There are currently no known objective biomarker which can reliably differentiate the two conditions, and there is even some controversy regarding whether DLB and PDD are two distinct disorders or represent manifestations of the same underlying condition. This distinction is critical for our understanding of these conditions and their biological mechanism and for accurate and relevant assignment of patients to clinical trials. Two recent publications led by MDC researchers address this problem from two different perspectives: neuropathological findings and neurophysiological activity.

Neuropathology and progression of clinical features

This study, led by MDC researcher Prof. Tom Warner together with colleagues from the Queen Square Brain Bank (QSBB), aimed to uncover new clinical and neuropathological features that could distinguish between DLB and PDD. The analysis was based on pathological findings and comprehensive clinical data of PDD and DLB cases from the QSBB. The researchers evaluated the time course and progression of several clinical milestones, and assessed the severity of neuropathological features associated with Lewy body pathology, AD pathology and the presence of amyloid-β in blood vessels; a condition known as cerebral amyloid angiopathy (CAA). Clinically, the researchers found that DLB showed more rapid progression and worse prognosis compared with PDD. They also found that dyskinesia was much more common in PDD compared to DLB, but showed that this was likely due to higher doses of levodopa used in the treatment of people with PDD. An important neuropathological finding of the study was the observation that CAA was more common in DLB. CAA pathology is important as it can be diagnosed in life via MRI and therefore may potentially be used to aid diagnosis and distinguish the two conditions. Further investigation is required to understand the contribution of cerebral blood vessel pathology in DLB, its potential use as biomarker and the effects of therapeutic interventions targeting it.

This study was led by MDC researchers in collaboration with colleagues from the UCLH Functional Neurosurgery unit and the UCL Wellcome Centre for Human Neuroimaging. The researchers used data collected during neurosurgeries exploring the effects of deep brain stimulation (DBS) of a brain region called the nucleus basalis of Meynert (NBM) in patients with DLB and PDD. The researchers recorded neural activity (local field potentials) from deep brain structures (the NBM and the internal Globus Pallidus; GPi), while simultaneously capturing neural activity of the cortex, recorded by magnetoencephalography (MEG). By combining electrophysiological and imaging techniques the research team was able to characterize cognitive and motor neural network activity and connectivity and assess how they differ between PDD and DLB. The study indicated that overall activity patterns and network synchrony were similar between PDD and DLB. However, some specific differences between PDD and DLB were observed, mainly involving activity and connectivity within the sensorimotor parts of the neural network. Further investigations are required to determine how these activity patterns relate to the observed clinical features and whether the observed differences between PDD and DLB truly represent different electrophysiological disease signatures.

As many as 48% of people with late stage Parkinson’s Disease reside in institutions. This has significant economic as well as social consequences, especially since those with late-stage Parkinson’s who reside in nursing homes are the most expensive group to treat. However, relatively little is known on the clinical features and healthcare needs of this population and how they vary from those of patients living at home. The current study examined the sociodemographic and clinical data of patients living in nursing homes, compared to those living at home. Data was collected as part of the “Care of Late-Stage Parkinsonism” study, which is a multi-national collaboration led by MDC researcher Prof. Anette Schrag, designed to evaluate the needs of patients in late-stage Parkinson’s. Clinical assessments included questionnaires evaluating motor and a wide range of non-motor symptoms as well as structured personal interviews of patients and carers. The analysis uncovered many differences between people living at home and at nursing homes, most notably more severe motor symptoms, psychiatric symptoms and higher rates of dementia among people with Parkinson’s living in nursing homes. Outcomes of this study should be used to guide management of this patient population. Given that those living in nursing homes have more severe disease, are at greater need, and are less likely to attend outpatient clinics, efforts should be made to provide specialist input for these patients in their places of care.

Somatic mutations are changes to the genetic code (the DNA) that occur after the initial stage of fertilization, and may happen at any stage during the course of an organism’s development; during embryonic development, post-natally and even in aging. Somatic mutations lead to mosaicism, a condition defined as the presence of cells with different genomes in one single individual. In this review, MDC researcher Prof. Christos Proukakis focuses on somatic mutations in the brain and their association with neurodegeneration. Somatic mutations may be benign and appear in normal brain. However, in the context of disease, these mutations could act as initiators or risk factors for disease, but may also result from the disease process itself, potentially contributing to progression. The current knowledge in specific neurodegenerative diseases is reviewed, including common sporadic disease, but also inherited disorders where mutations affecting DNA repair mechanisms may play a role.