Understanding the experiences of people with late stage Parkinson's, Untangling the roles of GCase and alpha-synuclein in the progression of Parkinson’s pathology & Unraveling the enigma of cortical tremor 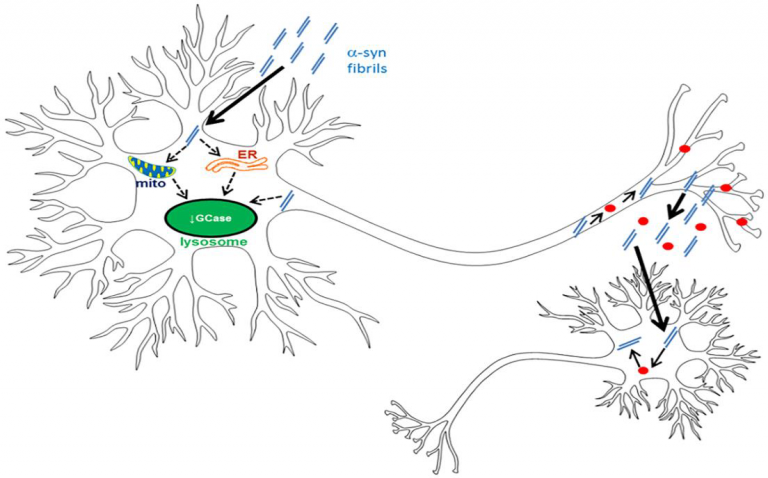 Understanding the experiences of people with late stage Parkinson's

There is a surprising scarcity of research into of the problems encountered by people in the late stages of Parkinson’s disease, even though this population experiences the greatest Parkinson’s-related impairment and requires significant medical and non-medical management. The Care of Late Stage Parkinsonism (CLaSP) study, led by Prof. Anette Schrag from UCL’s Queen Square MDC, is a longitudinal study of patients with late stage Parkinsonism across six major European health care systems. The study collected comprehensive information about motor and non-motor clinical features of people who have been diagnosed with Parkinson’s for seven years or more and are clinically determined to have advanced disease and/or significant disability. The 700 people who participated in the study were around 76 years of age and had an average disease duration of more than 15 years. As expected, the study found that severity and frequency of motor and non-motor symptoms was generally high in this patient population, higher that observed in early disease stages, but also higher than observed in people with advanced but not late stage Parkinson’s. One exception to this was severe dyskinesia leading to advanced therapies, which was quite rarely observed among the study’s cohort. The most common and disabling problems reported by people with late stage Parkinson’s were falls, severe motor symptoms with prolonged off-periods despite the large variety of available treatment option and the presence of hallucinations or delusions. These findings indicate that current treatment of late stage parkinsonism in the community remains insufficiently effective to alleviate disabling symptoms in many patients. The information collect through this study can be used to inform how best to provide effective care for this severely affected patient group and contribute to improved practices for clinical care.

Unravelling the enigma of cortical tremor

Cortical tremor is a relatively recently described form of movement disorder. The disorder is familial, but the genes that cause it have not been fully identified yet. Its main characteristic is a tremor present during posture and action (but not at rest), most often in the hands, but which can also involve other parts of the body. Other clinical features common in families with cortical tremor include epilepsy and cognitive impairment. In this review, MDC researchers led by Prof. Kailash Bhatia present the clinical and genetic features of cortical tremor along with pathophysiological findings and suggest potential neural mechanisms underlying this disorder. The authors show that the core feature of cortical tremor is its rhythmicity and provide evidence suggesting that this can be driven by a cerebello-thalamo-cortical feedback loop. They propose that the cerebellum likely plays a major role in cortical tremor and could represent the link between this disorder and the wider spectrum of cortical myoclonus disorders.