A new programme to test promising genetic therapies for neurodegenerative and dementia-causing diseases such as Alzheimer’s will be launched at UCL thanks to a £5m donation by the Sigrid Rausing Trust, one of the UK’s largest philanthropic foundations. 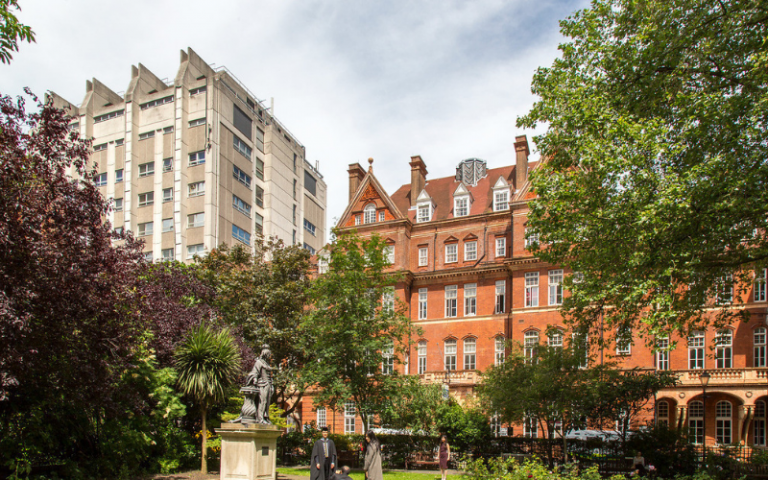 The donation to UCL’s renowned Queen Square Institute of Neurology will create a new Neurogenetic Therapies Programme to build on advances in understanding the genetic basis of neurodegenerative diseases, and significantly speed up their translation into effective treatments.

There are currently no effective treatments to slow the progression of dementia, which affects 850,000 people in the UK, predicted to rise to over one million by 2025. In 2017, dementia was the leading cause of death in the UK for the third consecutive year, accounting for more than one in eight of all deaths.

This major new funding will boost clinical trial capacity within UCL’s Leonard Wolfson Experimental Neurology Centre, the UK’s only clinical research facility dedicated to experimental medicine in neurodegeneration, itself founded by philanthropy from The Wolfson Foundation in 2012. The new Programme will test the most promising new emerging therapies sourced from within UCL and other universities in the UK and internationally - taking advantage of UCL’s position as the hub and headquarters of the UK Dementia Research Institute, a coalition of leading universities and charities across the UK joining together to tackle dementia.

Dr Adrian Ivinson, UK DRI Director and COO, said: “At the UK DRI we’re tackling dementia from all angles. One such promising area is genetic therapies, and we’re grateful to the Sigrid Rausing Trust for recognising the importance of this area of investigation and generously supporting our work. We are looking forward to building on our strong collaboration with UCL and others who share our belief that research can conquer dementia.”

Alan Thompson, UCL’s Dean of Brain Sciences, says: “This is a transformative gift that will significantly quicken the pace at which we can develop much needed therapeutic solutions for people who live with dementia and other neurodegenerative conditions.”

Professor Bart De Strooper, Director of the UK Dementia Research Institute, adds: “We have a huge amount of discovery science to do in relation to dementia, so the ability to move quickly when novel research shows promise is important. This funding will enable us to leverage the power of the UK DRI and demonstrate global leadership in conquering dementia.”

Professor Michael Hanna, Director of the UCL Queen Square Institute of Neurology, says: “Driving promising ideas through the development process and into clinical trials as quickly as possible is absolutely vital if we are to deliver much-needed advances against dementia and other neurodegenerative diseases. I am very excited that this new funding will enable us to expand and accelerate the translation from lab to clinic.”

Professor Michael Arthur, President & Provost of UCL, says: “The Sigrid Rausing Trust is a hugely influential and far-sighted foundation, and I am very proud that UCL is the recipient of one of their largest ever gifts for health research. UCL’s neuroscience community is one of the most high-cited, most collaborative and most interdisciplinary in the world, and nowhere is better placed to make much-needed advances in understanding, diagnosing and treating dementia. I am delighted that we are partnering with The Sigrid Rausing Trust on this exciting new initiative to speed up the translation of basic research into effective therapies.”

Sigrid Rausing, Founder and Trustee of the Trust, says: "We were persuaded to make this grant by the references we requested and received from the medical community, which highlighted not only the undoubted expertise of the UCL team, but also, more generally, its collaborative approach to science. Global collaboration and open access should be a given for all publicly funded research, and the same goes for research supported by charitable gifts. Our aim was to support the most effective research into the highly complex syndrome of dementia, and we very much hope that our grant to UCL will help to unravel the mysteries of this most devastating condition.”

The Programme, which will support four early-stage clinical trials over the next five years, will begin in August 2019, under the leadership of Professor Nick Fox, Associate Director of the UK DRI at UCL, as Principal Investigator.

Promising work in genetic therapies for neurodegenerative diseases has already started at UCL in work carried out at the Leonard Wolfson Experimental Neurology Centre by Professor Sarah Tabrizi and Dr Cath Mummery of UCL’s Institute of Neurology.

Professor Tabrizi has demonstrated a new drug that can suppress the effects of the genetic mutation that causes Huntington ’s disease. The trial found that the level of the mutant huntingtin gene that causes Huntington’s was lowered, and that the drug was safe and well-tolerated. The research is now moving to a larger trial to test whether the drug will slow the progression of the disease.

Dr Mummery has lead a first in human study on Alzheimer’s disease using a gene silencing treatment to reduce levels of the protein tau which accumulates in the brain of people with Alzheimer’s and some forms of Frontotemporal dementia (FTD), slowing the progression of the disease. So far the drug has been safe and well tolerated and will progress to a phase 2 study in both Alzheimer’s disease and a genetic form of FTD.