A new biotech company, AstronauTx Ltd, which builds on work from the Alzheimer’s Research UK UCL Drug Discovery Institute (DDI), has received an investment of £6.5 million from the government-launched Dementia Discovery Fund (DDF). 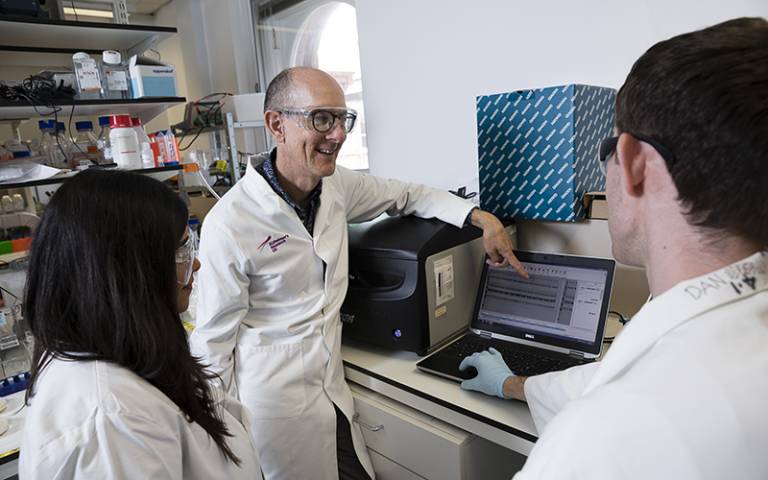 The UCL DDI is a dedicated centre working towards new approaches to tackle diseases that cause dementia.

AstronauTx will work with the UCL DDI to develop new medicines designed to reset the behaviour of astrocytes, crucial support cells in the brain. Astrocytes are normally very important for keeping nerve cells functioning well, but they change in Alzheimer’s disease and instead become damaging.

Researchers in the UCL DDI have identified a potential way to control the activity of astrocytes and allow nerve cells in the brain to function better for longer.

Professor Paul Whiting (UCL Queen Square Institute of Neurology), Chief Scientific Officer of the Alzheimer’s Research UK UCL Drug Discovery Institute, said: “The UCL DDI is designed to seize upon new academic discoveries, quickly assess their potential as a target for new therapies, and drive progress towards drugs that could be taken into clinical trials.

“Partnerships with industry are crucial for the success of our work. Biotechs like AstronauTx bring vital expertise to bear in drug discovery and early-stage clinical testing. Ultimately pharmaceutical companies are the ones with the resources to support expensive trials that will get potential drugs out of the lab and into the hands of the people who need them.

“We are excited that our work has attracted this new investment from the DDF and we’re looking forward to working with AstronauTx to realise the potential of this new approach for tackling Alzheimer’s.”

AstronauTx is supported by UCL Business (UCLB), the commercialisation company of UCL.

The DDF is a specialised venture capital fund investing in projects and companies that discover and develop effective disease-modifying therapies for dementia. It was formed by the UK government’s Department of Health and Social Care, in partnership with world-leading international pharmaceutical companies and the charity Alzheimer’s Research UK.

The drive towards novel approaches for Alzheimer’s therapies comes as drugs designed to tackle the hallmark Alzheimer’s protein, amyloid, have yet to deliver benefits to patients in clinical trials.

While the amyloid protein is still at the centre of the current understanding of how Alzheimer’s develops, it may play its part so early in the disease process that by the time symptoms start to show and people can be recruited into trials, other damaging brain changes have already been set into motion. Researchers are now learning from those developments to inform new ways to combat the disease.

The commitment from the DDF is the first partnership between the fund and Alzheimer’s Research UK’s £30m Drug Discovery Alliance, the UK’s largest university-based dementia drug discovery initiative. The Alliance was designed to act as a bridge between academic research and the pharmaceutical industry and unites Institutes at UCL and the Universities of Cambridge and Oxford.

“This is a fantastic step forward for the UK’s dementia drug discovery work and a great example of how collaboration across the dementia research landscape is fast-tracking the development of new treatments. The DDF was set up to invest in the most innovative ideas from across the globe and it’s brilliant to see them working closely with Alzheimer’s Research UK’s drug discovery teams,” he said.

“As the global cost of dementia is now estimated to exceed $1 trillion, new ways to help people affected by the condition cannot come soon enough.”

Dr David Reynolds, Chief Executive of AstronauTx Ltd, said: “In recent years, researchers have made incredible progress building our understanding of how the diseases like Alzheimer’s develop in the brain. It’s critical that our efforts to tackle these diseases reflect their newly discovered facets.

“While damage to nerve cells in the brain is the direct cause symptoms of Alzheimer’s, these cells don’t operate in isolation. Scientists are revealing more and more about the role astrocytes play in the disease and while they may previously have been seen as neutral bystanders, it’s becoming increasing clear that they represent a promising target for future drugs.

“AstronauTx has assembled an expert team to take this work forward and we are one of a growing number of enterprises, including start-ups whose work is being made possible thanks to investment by the DDF.”

Angus Grant, CEO of the Dementia Discovery Fund, said: “The novel research conducted by the UCL DDI demonstrated a compelling investment opportunity for the DDF and led us to form this new company. We look forward to continuing to help AstronauTx progress its research through to the clinic.”