Study reveals brain mechanism for perceiving which way is up

A new study by researchers at UCL Queen Square Institute of Neurology could help to understand the lack of balance that arises from brain diseases and normal ageing. 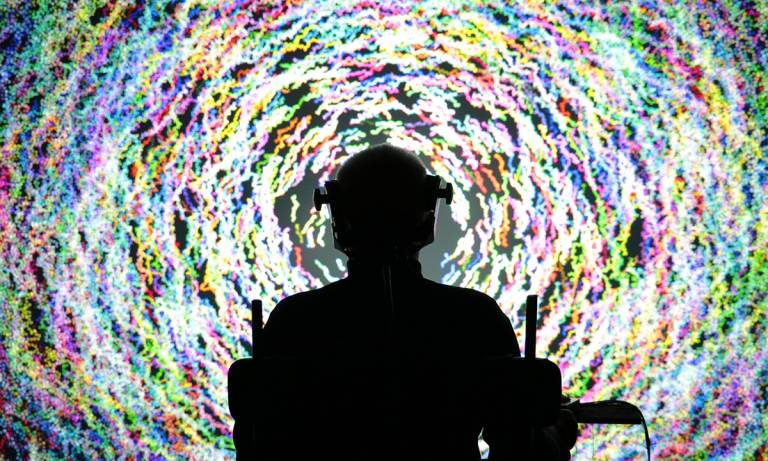 The study highlights the complexity of knowing which way is up. It does this by studying patients affected by SCA6, a genetic condition that leads to the degeneration of the cerebellum, a part of the brain which when damaged leads to a lack of movement coordination, known as ataxia, and balance difficulties.

By discovering an altered effect on verticality perception in these people, using a novel form of visual stimulation, the researchers identified a role for the cerebellum in the brain’s estimation of which way is up. This discovery could help improve understanding of balance disorders and potential treatment options.

Co-author, Professor Brian Day, UCL Queen Square Institute of Neurology, said that knowing which way is up is “fundamental to a number of perceptual and motor processes, for instance: orienting our body relative to the world, balancing our body, predicting our own motion and intercepting objects moving under the influence of gravity. Because the direction of gravity is not unequivocally signalled by any one sensory receptor, the brain has to estimate it, combining information from multiple sensory sources such as the eyes and the inner ear"

The study, published in Current Biology used a visual stimulus in which the visual field was filled with coloured dots that jiggled about as they simultaneously rotated en masse.

The study showed that while the visual rotation stimulus distorted verticality more in elderly people than young people, the distortion was far greater in people with cerebellar disease.

This increased reliance on visual cues suggests that the cerebellum’s job is to process vestibular signals from the inner ear that is then combined with visual information for the brain to estimate which way is up.

“This research may help to understand some of the symptoms, such as balance and perceptual disturbances, experienced by people with cerebellar disease and could provide a biomarker to assess future therapeutic approaches,” said Professor Day. “The increased sensitivity to dynamic visual cues may be related to problems encountered in everyday life. For example, people with cerebellar degeneration often report that balance difficulties are particularly severe in busy visual environments such as when walking alongside a busy road or in a crowd.”

Professor Paola Giunti, head of the Ataxia Centre at UCL/UCLH, clinical neurologist and co-author, believes that “this type of research is crucial to shed light on the mechanisms that underly the complexity of balance. Importantly, using the results of this novel research project could pave the way for more studies on treatment for people with ataxia resulting from cerebellar degeneration as well as in the ageing population by targeting visual stimulation”.