Six scientists from the UCL community have been elected as Fellows of the Royal Society in recognition of their outstanding contributions to research and innovation that benefit humanity. 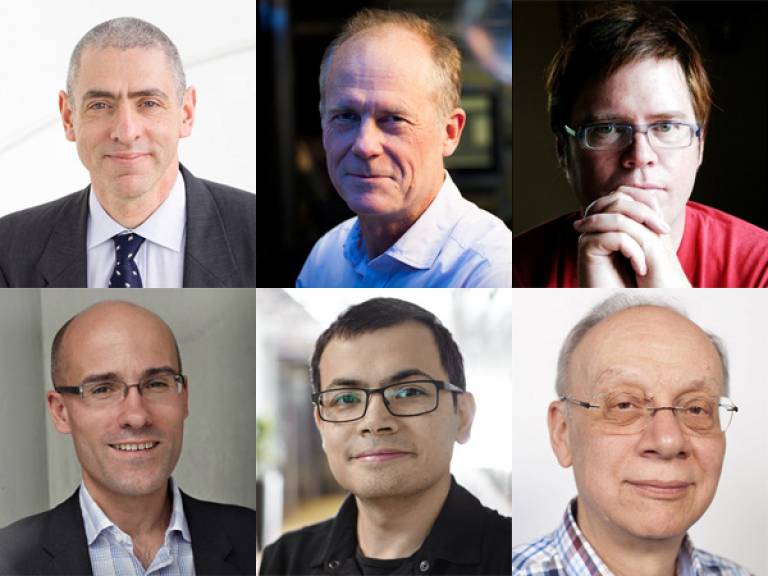 Professor Peter Dayan is recognised internationally as a leader in the rapidly developing field of computational neuroscience, applying methods from machine learning and artificial intelligence to understand neural function, with a particular emphasis on representation and learning. He won the 2017 Brain Prize for his analysis of how the brain recognises and processes reward.

Professor Dimitri Kullmann works on basic neuroscience and its application to clinical neurology. He has played a key role in important discoveries about the fundamental mechanisms of how neurotransmitters pass information from one neuron to another, the computational properties of small neuronal circuits, and how those processes can differ in epilepsy and other neurological disorders. He is a consultant neurologist at the National Hospital for Neurology and Neurosurgery and current Editor of Brain.

Professor Peter O’Hearn has made major contributions to the science and engineering of methods for ensuring program correctness. His impressive portfolio of research ranges from abstract topics such as mathematical models to the logics of programs, automated analysis of industrial software in the millions of lines of code and its application to industry. He is based at UCL and Facebook following the 2013 acquisition of his startup, Monoidics, and now joins an esteemed network of just 31 computer scientists at the Royal Society.

Professor Charles Swanton leads a lab at the Francis Crick Institute, is Co-Director of the CRUK UCL Cancer Institute Lung Cancer Centre of Excellence and a consultant thoracic medical oncologist at UCLH. He researches how tumours evolve into cancer cells that have different genetic mistakes, contributing to the drug resistant and incurable nature of metastatic cancer. His work has led to valuable insights into molecular mechanisms driving cancer branched evolution.

After completing his PhD in cognitive neuroscience at UCL, Dr Demis Hassabis went on to co-found DeepMind technologies, a London-based machine learning AI startup that was acquired by Google in 2014, while continuing to collaborate with and support UCL. His fellowship recognises his pioneering work merging cognitive neuroscience and machine learning to produce breakthroughs in deep learning that helped master the game of Go with AlphaGo.

Dr Vassilis Pachnis is a group leader at the Francis Crick Institute and honorary professor at UCL. His research focuses on the genetic and molecular underpinnings of the development, assembly and maintenance of two sets of neural circuits: those that are intrinsic to the gut wall and regulate gastrointestinal activity and those that provide inhibition in the cerebral cortex of the brain. By understanding these processes, his team hopes to gain insight into causes of neurodevelopmental diseases.

Professor Michael Arthur, UCL’s President & Provost, said: “The UCL community takes great pride in our six new Fellows of the Royal Society, as it is an immense honour and I am delighted that their outstanding contribution to science has been recognised in this way. I offer my warmest congratulations to Peter Dayan, Dimitri Kullmann, Peter O’Hearn, Charles Swanton, Demis Hassabis and Vassilis Pachnis, who all exemplify UCL’s global impact across a wide range of academic fields.”

“I am delighted to add my personal congratulations to Dimitri on his election as FRS. This is an enormous and very well deserved achievement. Over the last 30 years Dimitri has consistently made important and robust experimental observations of the highest quality which have increased fundamental knowledge on aspects of neuronal excitability and which have significantly informed our understanding of paroxysmal neurological diseases including epilepsy and channelopathies. Dimitri’s rigorous work, often driven by careful clinical observations, is in the very best traditions of the clinician scientist at Queen Square.” Professor Michael Hanna, Director of UCL Institute of Neurology.