New research led by UCL Institute of Neurology has shown that a cheap, non-invasive test - optical coherence tomography (OCT) - could be key in diagnosing a rare inherited disease. 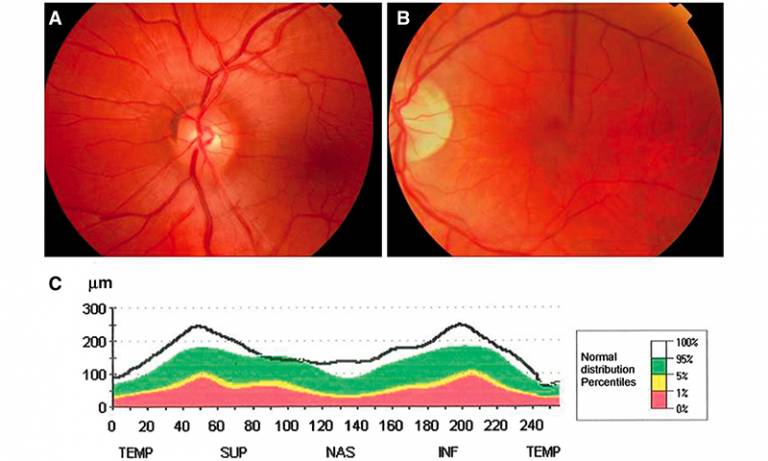 OCT is a readily available, non-invasive imaging technique that provides high-resolution images of the retina, retinal nerve fibre layer and the optic nerve head. This test is used to diagnose many eye diseases but for the first time this test has proven successful in achieving a definitive diagnosis in a very complex genetic neurodegenerative disorder, according to findings published in Brain.

The disease Autosomal Recessive Spastic Ataxia of Charlevoix-Saguenay (ARSACS) is a progressive neurodegenerative condition, a type of ataxia, which is most prevalent in the Charlevoix-Saguenay region of Quebec, Canada, affecting approximately between 1 in 1,500 and 1 in 2,000 individuals. Outside Quebec, ARSACS is rare and the prevalence is unknown.

People of any age may be affected by ARSACS. The condition is an autosomal recessive disorder; affected individuals have two faulty (or mutated) copies of a gene. It is possible to inherit a single faulty copy of the gene without developing the condition. There is currently no cure or treatment to stop ARSACS’s progression.

In the first systematic project of its kind, study lead Professor Paola Giunti (UCL Institute of Neurology, Head of the Ataxia Centre at UCL/UCLH and a BRC-funded Consultant), and colleague Dr Fion Bremner (also part of the Ataxia Centre), have used OCT to test a very large group of patients affected by ataxias to see if this test could predict the genetic diagnosis causing ataxia in some patients. To identify which genes were responsible, they created a genetic panel to screen several genes known to be responsible for some of the inherited ataxias.

The results showed that among the nearly 300 individuals tested with OCT, significant retinal nerve fibre layer thickening was only identified in the 17 ARSACS patients in the study. Patients with other causes of ataxia all had either a normal or thinned retinal nerve fibre layer, providing a sensitivity of 100% and specificity of 99.4% amongst patients affected with ataxias.

This is the first time that a test that is not a laboratory-based genetic test has been shown to identify a genetic condition with accuracy.

Second, this study provides evidence to support study on deep phenotyping in other neurodegenerative disorders to identify cheap and readily available biomarkers to diagnose genetic disorders with accuracy.

Third, the identification of OCT as a sensitive and specific diagnostic tool raises the possibility that it could be used in the future as a biomarker in clinical trials; further study is warranted in this area. The very specialised nature of the Ataxia Centre at UCL/UCLH, with its strong translational research component in rare diseases, made this project possible.

Professor Giunti commented, “The Ataxia Centre provides a robust model of translational research in improving the understanding of rare neurodegenerative diseases. The patients in this study went through a rigorous protocol which provided the data which showed that thickening of the retina on OCT is a hallmark of ARSACS. This test can therefore be used in the diagnosis of this condition.We are excited now to extend our study to try and understand the nature of this retinal thickening by further basic research that we are hoping to carry out in my laboratory.”

Professor John Hardy Head of the Department of Molecular Neuroscience at UCL commented, “This is a really important finding, as this is proof of concept of an approach that is much needed in neuroscience. Due to the increased number of genetic variants that are coming out more and more from whole genome sequencing approaches, it is becoming increasingly important to develop sensitive and specific novel biomarkers for neurodegenerative diseases.”

Prof Nick Wood, BRC Director for Neurodegeneration, added “Professor Giunti’s work demonstrates the crucial multidisciplinary approach in unravelling rare neurodegenerative disorders. The collaboration between scientists, geneticists, ophthalmologists and neurologists within UCL/UCLH and its partner at Queen Mary University of London and Barts Health NHS Trust, has been crucial in the success of this project. This is in line with the BRC NIHR aim to support highly translational research to implement evidence-based medicine to achieve clinical excellence”.

The project was funded by Ataxia Charlevoix-Saguenay Foundation, Barts Charity and Ataxia UK.

Barts Charity’s Director of Grants, Francesca Gliubich PhD, said “We are delighted to have provided early funding for the scientific journey that has delivered this novel diagnostic. These results demonstrate how an interdisciplinary, multi-centre collaborative approach is essential to gaining insight into rare diseases.”

The study was conducted at the UCL/UCLH Biomedical Research Centre which is funded by the National Institute of Health Research (NIHR). The Ataxia Centre also receives funding as part of the European Friedreich’s Ataxia Consortium for Translational Research (EFACTS) from the European Commission’s FP7 programme.