People with type 2 diabetes are 32% more likely to develop Parkinson’s disease than those without diabetes, finds a new study by UCL, University of Oxford & Queen Mary University of London researchers 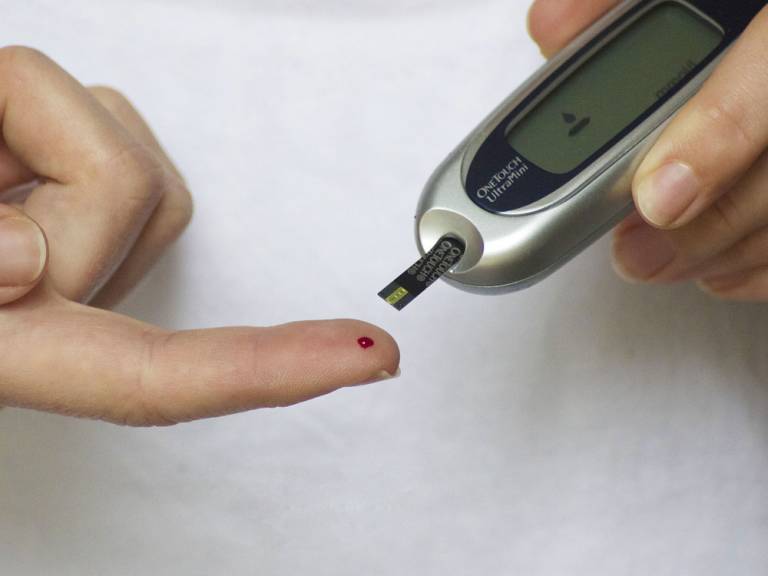 The research, published in Neurology, the medical journal of the American Academy of Neurology, is the largest study to date on the link between the two conditions.

“We can now say more definitely that there is a link between diabetes and Parkinson’s, but we need to do more research to understand the relationship – whether it’s due to genetics, the effect of diabetes on the brain, or both,” said the study’s lead author, Professor Tom Warner (UCL Institute of Neurology).

“While the association is substantial, it’s still clear that most people with type 2 diabetes will not go on to develop Parkinson’s disease,” he said.

Using the Hospital Episode Statistics in England the study followed 2,017,115 people with a type 2 diabetes diagnosis during a hospital admission from 1999-2011, excluding people who already had a Parkinson’s diagnosis, and studied them alongside a comparison group of over 6 million people from the same database without type 2 diabetes.

Among the people with diabetes, 14,252 had a diagnosis of Parkinson’s disease during a later hospital admission, compared with 20,878 in the comparison group.

After excluding people with some similar conditions, and controlling for age, sex and region of residence, they found that people with type 2 diabetes were 32% more likely to have a subsequent diagnosis of Parkinson’s disease.

The link was strongest among younger people (aged 25-44), and people with more complications from their diabetes.

The researchers say the link could be due to a shared genetic predisposition to both conditions, supported by prior studies finding more than 400 genes linked to both diabetes and Parkinson’s. This could explain why the link was strongest among younger people, where genes may play a bigger role.

The link may also reflect the effect of diabetes on insulin signalling in the brain, which corresponds with the finding that those with complicated type 2 diabetes face a particularly high risk of Parkinson’s.

Parkinson’s disease is the second most common neurodegenerative disease worldwide, and causes impaired movement. With type 2 diabetes, the body resists insulin, which is necessary for converting glucose into energy. As brain cells are particularly reliant on glucose for energy, it has long been speculated that the two diseases could be linked.

The findings could help advance the treatment of Parkinson’s disease, adding to evidence that restoring the brain’s insulin signalling could have a protective effect on the brain. A UCL-led study published last year found that a drug commonly used to treat diabetes shows promise in not only relieving Parkinson’s symptoms, but potentially altering the course of the disease itself.*

“We’ve added to evidence that diabetes and Parkinson’s are linked, which in turn raises the possibility that they may respond to common therapies. We hope that furthering our understanding of the relationship between the two diseases could help improve treatments for both conditions,” said co-author Dr Alastair Noyce (UCL Institute of Neurology and Queen Mary University of London).

“Previous studies have shown conflicting evidence as to whether people with type 2 diabetes are more likely to develop Parkinson’s, so our cohort study, the largest to date, helps clarify the direction of that association,” said co-author Dr Eduardo De Pablo-Fernandez (UCL Institute of Neurology).