We are delighted to announce that Professor Frederik Barkhof, Professor of Neuroradiology at the UCL Institute of Neurology, has been awarded the 2018 John Dystel Prize. 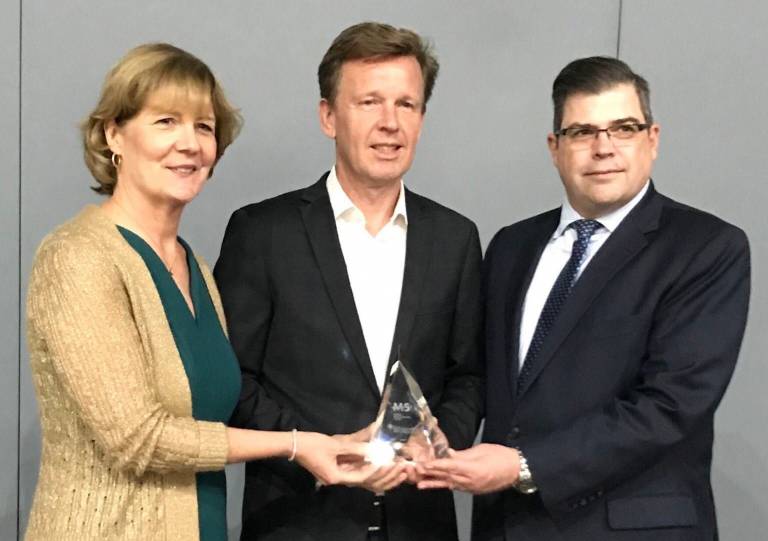 Professor Frederik Barkhof was awarded the prize for his outstanding contribution to multiple sclerosis research in the understanding, treatment and prevention of multiple sclerosis. He is a pioneer in the field of investigative neuroradiology: the use of magnetic resonance imaging (MRI) techniques to study multiple sclerosis. The “Barkhof criteria” he developed are critical in using MRI findings to enable an earlier and accurate diagnosis of MS.

The John Dystel Prize is awarded by the National Multiple Sclerosis Society (USA) and the American Academy of Neurology.

The award is in following with a strong UCL Institute of Neurology tradition as this prize has been previously awarded to Professors Ian McDonald, David Miller and Alan Thompson.

“In my opinion, no advance in MS research has made more of an impact on the disease than MRI and Professor Barkhof has been at the forefront of this effort since the early stages of its development,” noted Henry F. McFarland, MD (Scientist Emeritus. NINDS, NIH), the 1998 Dystel Prize winner who nominated Prof. Barkhof for the Dystel Prize.

“He has made important contributions across a range of interrelated areas including diagnosis, monitoring, trial design, and disease mechanisms,” wrote Alan J. Thompson, MD (Dean of the University College London Faculty of Brain Sciences) and 2017 Dystel Prize winner, in support of the nomination. He combines “collegiality with scientific rigor and a passion for collaboration.”

Professor Barkhof received the award and gave the prize lecture on April 22, 2018 at the Annual Meeting of the American Academy of Neurology in Los Angeles.