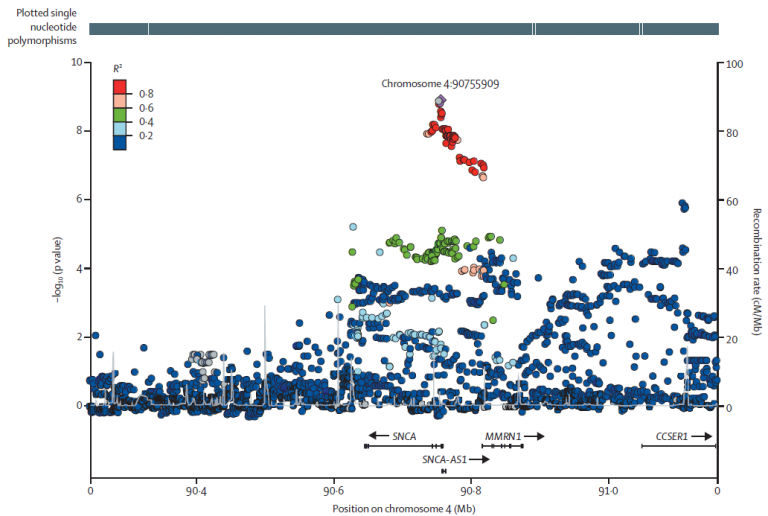 Dementia with Lewy bodies has a unique genetic profile, distinct from those of Alzheimer’s disease or Parkinson’s disease, according to the first large-scale genetic study of this common type of dementia which was led by UCL Institute of Neurology.

The genome-wide association study, conducted by a UCL-led collaboration of 65 academics in 11 countries and funded by Alzheimer’s Society and the Lewy Body Society, is published today in The Lancet Neurology.

“Dementia with Lewy bodies accounts for 10-15% of dementia cases, yet our understanding of it lags beyond the more well-known Alzheimer’s disease, partly because it’s commonly misdiagnosed. Our findings clarify the disease’s distinctive genetic signature, which should, in the future, help improve clinical trials, and lead to more targeted treatments,” said the study’s lead author, Dr Jose Bras (UCL Institute of Neurology).

The research team genotyped 1,743 patients with dementia with Lewy bodies (DLB) – including both clinical samples and 1,324 pathological samples assessed post-mortem – and 4,454 controls.

The researchers were able to identify a heritability estimate of DLB for the first time, at 36%, which is similar to that of Parkinson’s. The heritability was particularly high for four specific chromosomes, suggesting that further research could focus on those chromosomes to identify novel loci.

“As the gene loci that had previously been associated with DLB were also implicated in Alzheimer’s and Parkinson’s, it was unclear if DLB’s genetic roots were simply a combination of the other two diseases. We’ve confirmed that instead, it has its own unique genetic profile. The selection of study participants has been a substantial challenge in dementia trials. Our findings can be used to identify more clearly which type of dementia each person has, so that they can take part in the right clinical trial, which could lead to better treatments and diagnostic tools” explained the study’s first author, Dr Rita Guerreiro (UCL Institute of Neurology).

The researchers also hope that by advancing the understanding of which genes play a role in DLB, their results will aid in the development of targeted therapies.

“DLB and Parkinson’s have many similarities, as people with DLB often develop Parkinson’s symptoms, and Parkinson’s often leads to dementia. By understanding the genetic underpinnings, we can more effectively target treatments to the different groups,” said Dr Bras.

“Dementia with Lewy bodies is often misunderstood as being a mixture of Alzheimer’s and Parkinson’s, but this confirms it’s actually a unique condition. Despite DLB being one of the most common forms of dementia in older people, until now there simply hasn’t been enough information on its causes, so the finding that up to 36% of cases might be genetically inherited is a real revelation. As the largest and most detailed study of its kind, these results will be invaluable in future research, and it’s a great milestone on the road towards our goal of understanding and treating all forms of dementia.” Dr Doug Brown, Director of Research at Alzheimer’s Society who funded the study