Dr Cath Mummery, head of clinical trials at the Dementia Research Centre, UCL Institute of Neurology, was interviewed on BBC News and Channel 4 yesterday evening about the interim results of a Phase I study of adecanumab, a monoclonal antibody, reported in Nature.

Dr Mummery was not involved in the Phase I study but is now the Principal Investigator for the Phase III study being done at UCL Institute of Neurology on the back of these results. The sponsor is Biogen.

The study found a marked reduction in amyloid load using PET scans and confirmed the drug removes amyloid from brains of people with Alzheimer's disease (AD).

The study showed some signal of slowing in cognitive decline associated with reduction in cognitive load. This is encouraging though definitive results from the phase III study are still needed.The Phase III study endpoint is cognitive and if that confirms the possible signal in the phase I (in 18-24 months’ time)  that could be a game changer in the way we trial and treat in AD. 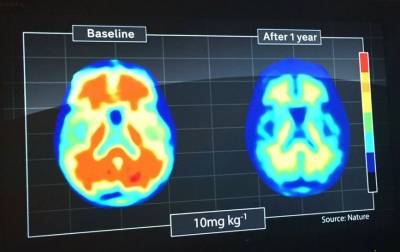