A new BBC One film examining the science behind dementia, which was partly filmed at the Queen Square Brain Bank and the Leonard Wolfson Experimental Neurology Centre (LWENC), UCL Institute of Neurology, aired last week.

Angela visits the Queen Square Brain Bank where Professor Janice Holton demonstrates the shrinkage of the brain typically seen in dementia and how this compares with the normal. Angela learns the importance of microscopy in analysing the brain in Alzheimer's disease to make a diagnosis and to increase our understanding of the disease. 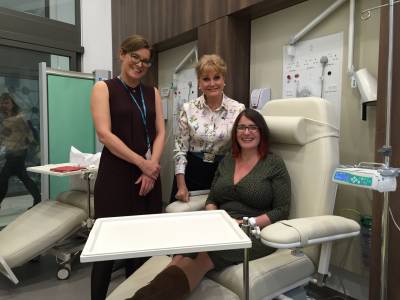 Dr Catherine Mummery, head of clinical trials at the Dementia Research Centre, UCL Institute of Neurology, explains the ground breaking clinical trial taking place at the National Hospital for Neurology and Neurosurgery which aims to prevent the deposition of amyloid beta in the brains of patients at risk of Alzheimer's disease due to inheritance of a mutated gene.
If the trial is successful this could delay the onset of the disease in affected people and potentially the treatment could then be extended to sporadic Alzheimer's disease.