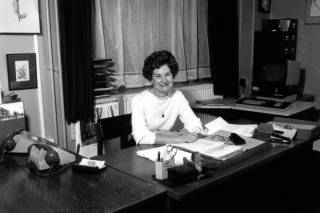 Pat was born on 3 May 1931 at her parents’ home in Stanhope Avenue in Finchley.
After the war she moved with her parents, Leslie and Doris, to Brookman’s Park where she was to live, in the same house, for over 60 years until 2010.

Pat went to school at Henrietta Barnet School in Hampstead Garden Suburb, where she played hockey (which I am told was to influence her golf swing in later years!) and tennis.
After leaving school Pat took a secretarial course and then went to work at the Middlesex hospital where she trained as an audiological technician, performing speech and hearing tests. After a spell of secretarial work she joined the Institute of Neurology at Queen Square, and in 1973 she was appointed Academic Registrar.

A large part of Pat’s job involved looking after doctors who came from overseas to train in neurology. She acted as “confidante, friend and adviser of whole generations of students from all over the world”. Altogether Pat spent 23 years at Queen Square. Many of the alumni have written to offer their condolences and to share their recollections.

“I have nice memories of Pat Harris, God bless her soul, during the diploma course I took in 1983. She was a dedicated, well organized and professional lady, the right hand of the late Professor Marshall. Always smiling - a faint but warm and persistent smile. She never said no to a request - but promised to try her best! I recall her helping me to find accommodation for my relatives. She called later to make sure that everything was fine. She really cared for others, and that is why all of us loved her,” said Professor Abdulrahman AlTahan.

“Pat was the most efficient secretary I have ever met. I have never received a response to an airmail letter as quickly as from her. She found the US students suitable housing, and was always available to us. Along with Professor Ian McDonald, she assisted the formation of the Queen Square Alumnus Association,” said Dr Michael Finkel.

“She was one of the mainstays at QS, always cheerful, always knew everyone and what they were doing etc. If my memory serves me right, she was instrumental in reviving or resurrecting the Alumni and remains a major part of QS in my mind,” said Dr John Rees.

“Pat and I worked together when John Marshall was Dean and then with David Landon. As Academic Registrar she worked tirelessly to ensure the postgraduate courses were well organised. She was devoted to the students and their welfare, and tried hard to ensure they gained fulfilment from their time at Queen Square and thereafter became - in most cases - overseas ambassadors. She made sure the academic achievements recorded in the Institute’s Annual Report reflected the distinguished contributions by the Hospital and the Institute. Her passion was golf and by all accounts she was a popular and well respected Captain of her Golf Club,” said Mr Julian Axe (Secretary to the Institute 1983-1988).

“I was at Queen Square during 1972-73 and had a marvellous relationship with her, an excellent and friendly officer in the Post-graduate activities of that Institution. Even after I came back to Brazil, from time to time she gave me some news about QS and I was very grateful. I think that everyone who spent some time at QS over those years have very good memories of her,” said Dr Luiz Augusto F. Andrade.

“During the almost 5 years I spent at Queen Square and at the Chalfont Centre for Epilepsy, Pat was my main mentor in my life as a whole. This was from 1977 to 1982, when I was in my early to mid-20s. I had to adapt from the life of a long-haired back-packer medical student in Brazil to that of a physician in the UK. She helped me decide where to live, which PhD supervisor to choose and which job to aim for. She was quite happy to give opinions on everything from clothing to my wedding. The few people who helped me with these decisions during that time could be counted on the fingers of one hand. I regret I did not stay in the UK so that I could go on having her mentorship,” said Paulo Rogerio M de Bittencourt (Curitiba, Brasil).

When she left, she donated a sum of money which was awarded to the student with the highest overall mark for the Diploma in Clinical Neurology. The prize was awarded each year from 1989 until 2011. Details on former prize winners can be viewed on the Institute of Neurology history page https://www.ucl.ac.uk/ion/about-institute/history-institute

Pat moved from her family home in 2010 as her health began to deteriorate. She continued to play a little tennis and visited the golf club for the occasional lunch with friends, but even this was to stop as her illness took an ever greater hold on her life. The strength and determination that Pat had shown throughout her life helped her to fight on, first at Catherine Lodge and later at Abbey Ravenscroft Park Nursing Home. In both Pat was regarded with great affection.