With thanks to Mrs Taylor for permission to reprint the obituary

Peter Gautier-Smith, only son of Claudius Gautier-Smith (King’s, Cambridge 1914) and Madeleine nee Ferguson, was born on March 1, 1929.  He went to Cheltenham College with an exhibition and he quickly showed an aptitude for sport, playing for the College at cricket in 1946, when he made 81 in an opening stand of 152 with Joe Lister, later to play for Yorkshire, against Haileybury at Lords and took 5 wickets for 66.  The following year he was captain of the side. He also played hockey for the College.  While at Cheltenham, he obtained higher certificate, the 1st MB and gained deferred entry to King’s College, Cambridge in 1949 following National Service from 1947 to 1949.  He served with the Royal Artillery, obtaining a commission, and played for the regiment at cricket.

The natural sciences course being too concentrated for cricket, he decided to take up squash.  Although he had played no more than a dozen times in the army, to his surprise, he reached the final of the University freshmen’s tournament and became a member of the King’s first team in his first term, which in 1949-50 was extremely strong with Hubert Doggart and Nigel Tomkinson, both blues and John Grace, a member of the Ganders, the University second team, in it.  During that season, the team was unbeaten, winning both the first division of the league and the cuppers.  In the following season he played several matches for the University and was captain of the Ganders.  In 1951-52, he was regular member of the University side and won his tie against Oxford in Cambridge’s 4-1 victory.  He was also a member of the University team, which toured the East coast of USA and Canada for the month of April 1952, playing against the Ivy League universities and many other teams, a memorable experience in those days of austerity and food rationing.
Peter also played one match for the University at rackets against RMA Sandhurst and represented the College at tennis under the captaincy of George Plimpton.

During his time at St. Thomas’s Hospital Medical School between 1952-1955 he captained the hospital squash team, which won the cup in 1955, the combined hospitals and London University teams, obtaining a full purple.  He played in the amateur championship and represented Hampshire in the county championship.  He was also a member of the hospital tennis team for three years.  He continued to play squash and real tennis until his late fifties and tennis and golf into his seventies.

He qualified MB, BCh in Cambridge in 1955 and had house appointments at St. Thomas’s in casualty and medicine, followed by a senior house post in neurology.  Following that he spent a year at the Royal Devon and Exeter Hospital in Exeter as resident medical officer and while there obtained membership of the Royal College of Medicine.  It was there, too, that he met Nesta Mary Wroth, the sister of Peter Wroth, whom Peter had known when paying cricket against Marlborough College and later in the army at Cambridge.  They married after she had completed her degree at the University of North Wales in 1960.

After Exeter, Peter became a medical registrar firstly at University College Hospital, London, a registrar in neurology and psychiatry at St. Thomas’s and then became resident at the National Hospital, Queen Square, followed by a senior registrarship and then a consultant post at St. George’s Hospital, London and at the National Hospital in 1962.  He obtained the degree of MD Cantab by a thesis in 1960 and was elected FRCP (London) in 1969.
His main interests in neurology between 1962 and 1975 were in the clinical practice and the teaching of both undergraduate and post-graduate students and he also published numerous paper in medical journals on various aspects of neurology, culminating on a book entitled ‘Parasagittal and Flax Meningiomas’, published by Butterworth in 1970. 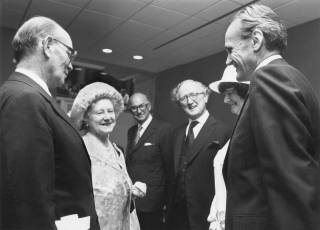 Having been sub-Dean at Queen Square from 1968-1972, when he was in charge of the teaching programme, in 1975, he left St. George’s Hospital to take up the post of Dean of the Institute of Neurology, a post he held for seven years.  He continued his clinical work at Queen Square during that time and also travelled extensively, as visiting professor in the USA, Canada, Europe, Australasia and Iraq, giving lectures and teaching and in the las named, advising about the development of neurology.  French was his mother’s first language, although she was English, and he had always had an interest in it and spoke it well enough to hold his own during a two week visit to L'hôpital de la Pitié-Salpêtrière in Paris, giving lectures and teaching the students in French.  Following his Deanship, he continued his clinical work and served as Chairman of the Medical Committee and on the newly constituted management team of the hospital.  He also undertook regular voluntary outpatient clinics in French at LE Dispensaire Francais in London.
He played both tennis and squash with many of the post-graduate students at Queen Square until he retired from the hospital in 1989 and made many friendships as a result.

In 1972, during enforced leave from the hospitals suffering from an unpleasant attack of mumps, Peter decided to try his hand at writing fiction and quickly produced a book entitled ‘Motive for Revenge’, which to his surprise and gratification was published by Robert Hale in that year.  A further twenty-seven novels followed over the years and he continued to write and be published into his eighties.  A keen if not particularly accomplished pianist, Peter played solo pieces at the biennial concerts at the National Hospital for many years.
Peter’s marriage of over fifty-seven years was a very happy one.  His wife Nesta was a constant support to him, entertaining many foreign visitors with dinners and games of tennis and accompanying him on many overseas and professional visits and holidays.  A good tennis player herself, she represented university, enjoyed many hours playing with and against Peter, both at home and abroad, as well as in regular women’s fours.  They even won their club mixed doubles tennis tournament together.  They also had many holidays with their two children mainly in North Cornwall, enjoying spirited table tennis and surfing, but also in Europe, both camping and touring.

The one great sadness in his life was the death of his daughter Susan (1963), a TV producer, who, having battled since the age of two with rheumatoid arthritis, died from dilated cardiomyopathy in 1996 at the age of 33, while pregnant with her first child.  Peter is survived by Nesta, his younger daughter Annie, and three granddaughters.