Addressing extremism through the classroom

As concerns grow about the scale radical content young people are coming across online, IOE, UCL’s Faculty of Education and Society, is working to create a more open and tolerant society. 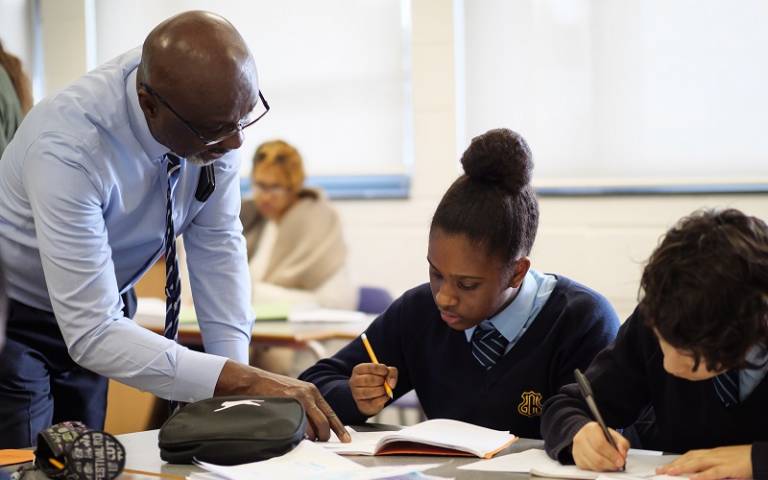 In 2021, research by academics from IOE’s Centre for Teachers and Teaching Research in collaboration with charity SINCE 9/11 found that extreme views such as racism, misogyny and homophobia were widespread in classrooms across the country.

More than half the 96 teachers the team surveyed had heard pupils express far-right extremist views in their classroom, and around three-quarters had heard “extremist views about women” or Islamophobia. But as well as the prevalence of hateful views, almost 90% had heard conspiracy theories, such as that American business magnate Bill Gates “controlled people via microchips in Covid vaccines”.

This research raised awareness of the scale of radical content, as well as the problems that exist in teaching young people about disinformation and the importance of tolerance. However, it also highlighted the opportunities to solve these issues.

There is the potential to tackle extremist views and conspiracy theories in school but due to an already crammed curriculum, teaching about extremism in UK schools is "highly variable", and in some cases "superficial" and "tokenistic". The researchers found that teachers are not being given the time, training or resources to teach pupils about violent and ‘hateful’ extremism.

“They could offer a valuable role by bringing their own pedagogical expertise to the classroom with professional development to ensure their classrooms are safe environments for open discussion.”

Doing this could open up conversations, ensuring that young people can understand differences in beliefs, and provide a forum for open discussion and a culture of tolerance and empathy.

The IOE research highlighted a key gap in professional development that if filled could be used to unpick extremist viewpoints, allow for a positive model of discussion and conflict for young people, build truth-seeking and empathy into knowledge and learning, and move towards a safer society. Leaning into difficult conversations and celebrating differences, and providing teachers with the training to do this, could be transformative for positive classroom cultures.

Doing so could allow young people to disagree in a constructive way and understand the issues with extreme views by exploring them in a safe, educational space, and create an education system where a much stronger emphasis is placed on critical thinking. Ultimately, this IOE research exposes the problem areas and makes the recommendations that if acted upon, could lead to a more tolerant, safer and wiser society.