The history of IOE 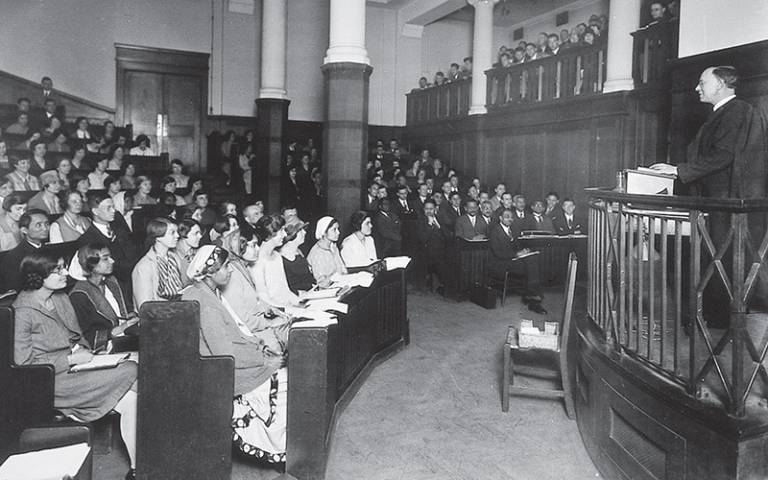 IOE was founded in October 1902 as the London Day Training College (LDTC), under the joint auspices of the University of London and of the London County Council. In 1932 it became the University's largest central activity as the Institute of Education, and from 1949 it became the centre of a wider Institute of some 30 associated colleges and departments of education. After occupying various premises in central London, in 1977 IOE moved to its permanent home, 20 Bedford Way, an iconic, Grade II* listed building of the British Modernist movement designed by Sir Denys Lasdun.

On 2 December 2014 the Institute and UCL merged to create a new institution with over 35,000 students, the biggest higher education institution in London, and the largest postgraduate institution in the UK, with 19,000 postgraduate students. IOE joined UCL as a single Faculty School, and became known as the UCL Institute of Education. The merger provided the opportunity to extend our global influence further, to work with traditional stakeholders in schools and colleges in new and more imaginative ways, and to deepen our cross-disciplinary work across the full range of education, culture, psychology and social science.

IOE is no longer known as the Institute of Education, but as IOE, UCL's Faculty of Education and Society, reflecting our important work beyond education from the 1930s onwards. The Newsam Library and Archives at the UCL Institute of Education holds extensive collections of current and historical materials on education and related areas of social science.

Throughout 2022 a series of monthly blogs explore each decade of IOE’s 120-year history in the context of the education and society of the times.