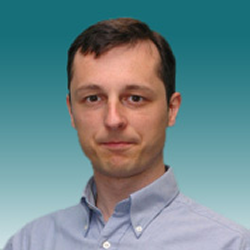 Cyril received the degree of engineering from the Ecole Supérieure d’Optique, Orsay, France, and the Diplôme d’Etudes Approfondies (D.E.A.) in Optics and Photonics from the University Paris XI, Orsay, France, in 1996. He spent one year as a project engineer with Sfim-ODS, working on the development of microchips lasers and portable range finders. He, then, joined the Optoelectronics Research Centre, University of Southampton, Southampton UK, in 1998, to work on diode-pumped high-power ytterbium-doped fibre-lasers, with particular interest on Q-switched system and 980-nm generation. This work led to the award of a PhD in 2001.

He is currently a Professor of Photonics at University College London, and the programme director for the UCL/Cambridge doctoral training centre in Connected Electronic and Photonic Systems. His work has led to over 160 publications in international peer-reviewed journals and conferences, attracting over 1900 citations and 3 patents.