UCL helps to usher in the ‘Future of Surgery’

The presence of robots, 3D printing, augmented reality, artificial intelligence and regenerative medicine in our operating theatres is no longer the preserve of science fiction novels but an increasing clinical reality. 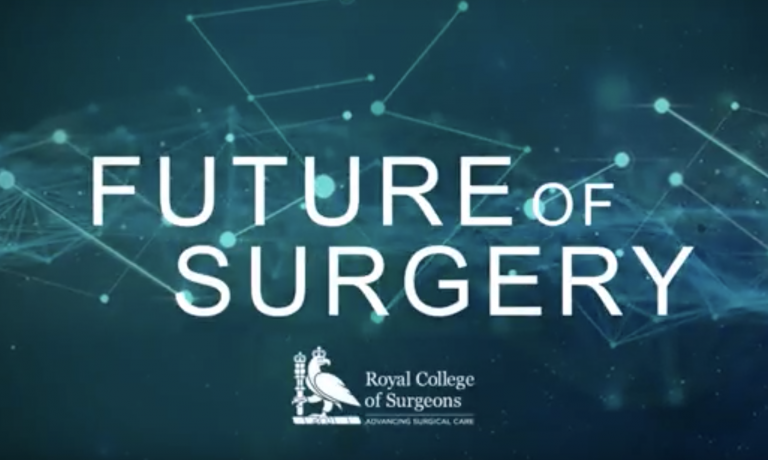 We welcome the recently published Commission on the Future of Surgery and its findings from the Royal College of Surgeons. The report identifies advances in medicine and technology that are likely to have the greatest impact on surgery over the next 20 years and transform surgical care for millions of patients.

The Commission highlights technologies such as surgical robots, artificial intelligence, three-dimensional printing and new imaging methods that are already changing and will continue to change the way that surgical care is delivered. Through the Wellcome / EPSRC Centre for Interventional and Surgical Sciences (WEISS), UCL is positioned at the forefront of these kind of advancements. The report also identifies developments in fields such as genomics, regenerative medicine and cell-based therapies that could open new avenues for predicting and treating disease and are actively been pursued by researchers within the IHE and elsewhere at UCL. 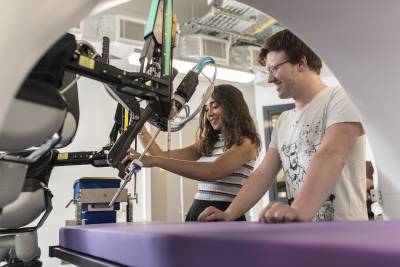 Professor David Hawkes, Director of WEISS, gave evidence to the Commission and comments, “The UK is leading the way in many of the innovations pointed to in the report and there is a vibrant network of SMEs working in this area. The remit of WEISS is to accelerate translation of novel engineering to innovative solutions in surgical and interventional sciences to the benefit of patients.

“Notable successes in the last couple of years include the development of a miniaturised camera able to provide live images from inside a beating heart, revolutionary imaging software able to pinpoint biopsies to detect prostate cancer and the first fetal surgery for spina bifida performed in the UK using UCL co-engineered technology.”

Professor Laurence Lovat, Clinical Director of WEISS said, ““Surgery used to be the domain of refined butchers. It then became a job for enlightened needlemakers. But our future will undoubtedly be in the hands of technological geeks.

"The rapid transformation of surgery from invasive open operations with prolonged recovery to highly targeted interventions with minimal invasion and rapid recovery in the last few decades has been breathtaking but we seem to be just at the beginning of a high-tech revolution which will make even Star Trek seem antiquated!”

We urge you to download the full report on the Future of Surgery microsite and find more about the exciting possibilities predicted to arrive with a new wave of technologies. Read on for a summarised exploration of the report’s main findings. 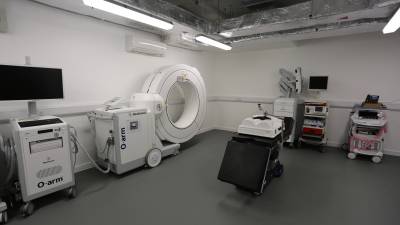 Our mock operating theatre (above) in WEISS' building helps us to simulate the reality of surgery during research experiements.

Advances in big data, genomics and artificial intelligence will enable ‘precision surgery’ – where treatments can be tailored to patients according to their genetic profile. Genomics has the potential to revolutionise surgical care by making some types of surgery redundant and by allowing doctors to better understand cancerous tumours and target treatment accordingly. Liquid biopsies from a variety of bodily fluids may make it easier for disease to be diagnosed earlier. Evidence received from geneticists, clinical scientists and surgeons specialising in genomics suggests that in 20 years the population may be able to undergo annual testing for cancer through a blood sample, while similar tests are already being evaluated to monitor disease recurrence.

According to the Commission’s expert panel, alongside major developments in laparoscopic and endoscopic surgery, surgical robots will be smaller, lighter, and likely cheaper. The next generation of surgical robots are now expected to be launched in 2019 and are drastically smaller and lighter, meaning they could be moved between theatres or even hospitals. This is very likely to make robot-assisted surgery more widely available in local hospitals and will narrow the gap in performance between surgeons.

Over the next few years the Commission expects robots to start becoming more commonly used in gynaecological procedures, colorectal and cardiothoracic surgery.

Developments in minimally-invasive surgery and advances in imaging will make more patients eligible for surgery, particularly the frail and elderly. For example, functional imaging of the brain is already enabling micro-surgery for some cerebral tumours.

Autonomous robots are not expected to replace surgeons due to the complexity and unpredictability of carrying out a surgical procedure, but nano-robotics to help diagnose patients and deliver drugs may become a reality longer-term, if enough of the current barriers are overcome.

The report suggests that virtual, mixed and augmented reality platforms will allow surgical teams around the world to share advice during operations, and specialist surgeons to carry out or support complex procedures remotely. For example, a surgeon in one hospital might guide a team in another unit through an operation using augmented reality. The report also notes that advances in imaging and simulation, as well as 3D printing, are already being used to complement surgical training and planning. The Commission highlights the advantages of 3D imaging to support planning of personalised surgical interventions, and creating patient-tailored implants using 3D printing techniques.

Over the next 20 years, ultra-high definition stereo endoscopes and microscopes are anticipated to be in use, making further improvements to the accuracy of diagnosis and surgery.

The expert panel has also considered specialised interventions such as some stem-cell therapies, 3D-bioprinting of tissues and organs, artificial organs, developments in transplant, and neural prosthetics with adaptive control mechanisms. The report suggests that in the short-term advances in 3D printing will lead to more advanced prostheses, while in the longer-term more advanced imaging could enable ‘nano-surgery’, where surgeons could use miniaturised devices to operate on individual cell clusters – potentially with dramatic effects for cancer patients.

Research is also underway into manufacturing artificial organs which are easier to replicate such as bile ducts, although such advances are only likely over a much longer timescale.

Surgical training and the workforce

The role of some surgeons is likely to become increasingly wide-ranging, sometimes crossing boundaries with clinicians in other areas of medical intervention where a vast array of other treatments may become preferable, such as in cancer surgery.

Surgeons will need to become ‘multi-linguists’, understanding the language of medicine, genetics, surgery, radiotherapy and bioengineering. Leadership, managerial and entrepreneurial skills will become increasingly important attributes of the surgical profession. The surgeon will play a key role in genomics, acquiring and handling tissue samples and being the first healthcare professional to discuss genetic analysis with a patient.

The multi-disciplinary and multi-professional surgical care team, including surgical care practitioners and physician associates, will become increasingly important in developing and delivering care of the highest quality. They will provide more aspects of care and may take over some areas of surgical care currently delivered by surgeons. The Commission raises the possibility that highly skilled surgical technicians may undertake some further procedures – such as endoscopy and endoscopic biopsies, removing skin lesions and maybe even carrying out caesarean sections – under the supervision of a surgeon.