For over a century, we have known that crucial steps along the path to the modern earth system took place during the first four billion years of our planet’s existence.

Just how did a large rock in space become today’s comfortable blue oasis? This is the central question to which the Precambrian research group is trying to find answers. As geologists, we know that it is not only life that evolves, but our planetary environment do, too. Indeed, the two are so intricately intertwined that scientists can seldom tease apart cause from effect in evolutionary puzzles such as: When did complex life evolve on our planet, and what triggered such a momentous event? How did our surface environment become oxygenated, and which nutrient feedbacks and system interactions keep it that way? Did oxygenation trigger the diversification of animals, or did animal evolution cause oxygenation? To what extent were tectonic upheavals responsible for forcing climatic and biological changes? How important were climatic crises in forcing biological evolution?

To address these questions, geologists look first to Earth’s rock archive which year-on-year gets better known and understood. Sedimentary rocks can directly preserve the traces of major revolutions in Earth history, providing hard evidence for events such as the ‘Great Oxidation’, ‘Snowball Earth’ and the ‘Cambrian Explosion’. In our group, we look primarily at the chemical, mineral and isotopic compositions of marine sedimentary rocks to trace changes in our planet’s oceans and atmosphere over time. Geochemical evidence provides important clues to paint the tectonic, climatic and environmental background to biological evolution on earth. New geochemical tracers are being developed all the time, with the key to fuller understanding being a multidisciplinary approach, integrating multiple geochemical tracers with geology, palaeobiology and modelling. As a group we have a strong interest in Chinese geology but also work in other regions of the world, including of course the UK. We welcome any interest from potential students or early career researchers to join our team.

We use strontium isotope stratigraphy to solve geological problems, primarily to date sediments undatable by other means. Some publications that have resulted from this work are listed below. The group collaborates widely with groups across the globe. Proposals for collaborative work are welcome. Consultancy work is sometimes undertaken. 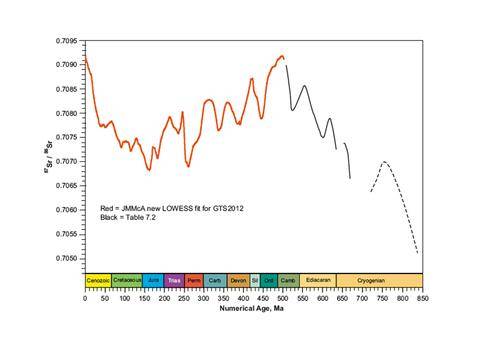 The University of London Strontium Isotope Stratigraphy Group has contributed to the construction of the global seawater strontium curve (McArthur et al. 1993; 1994; 1998; 2000b; 2007; McLaughlin et al. 1995; McArthur, Shields and Howarth, 2012) and provided a user-friendly table for the rapid and easy conversion of 87Sr/86Sr values to numerical age (Howarth and McArthur 1997; Howarth and McArthur 2001; McArthur and Howarth 2004.