The Brady Medal is the highest accolade of The Micropalaeontological Society (TMS) and is awarded to scientists who have had a major influence on micropalaeontology by means of excellent research and/or service to the scientific community. 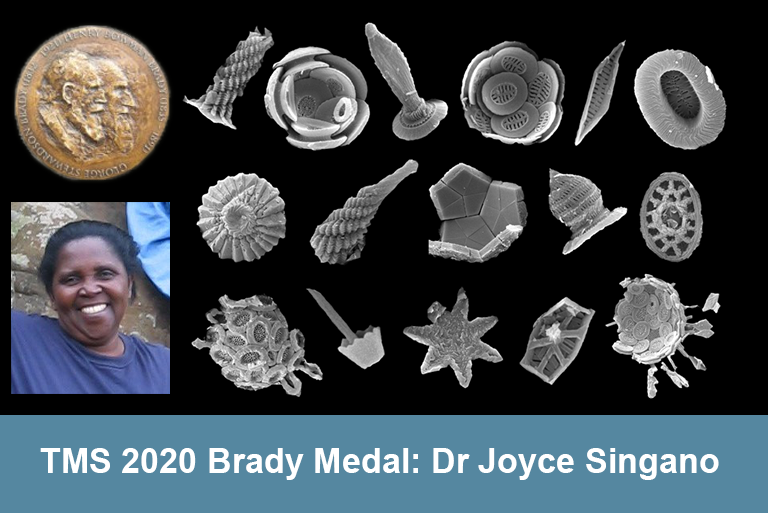 “The department would like to extend our congratulations to Joyce on the award of this prestigious medal.

Joyce Singano is a foraminiferal palaeontologist from Tanzania who carried out her PhD at UCL under the supervision of Prof. Fred Banner. She has spent her career at the Tanzania Petroleum Development Corporation (TPDC) in Dar es Salaam, where she set up her own laboratory from scratch and became the first professional micropalaentologist in Tanzania. Her laboratory at TPDC became one of the foremost in Africa and continues to thrive today. Most of her work has been applied, and therefore remains unpublished, but her work within the international Tanzania Drilling Project (TDP) underpinned the success of that research project and she has 12 published papers (many with UCL researchers Paul Bown and Bridget Wade) with almost 1500 citations to date, which undoubtedly represents a substantial body of outstanding research.

The TDP research encompassed almost all aspects of the geology and micropalaeontology of Tanzania and has yielded vital information about the evolution of tropical climate and carbon dioxide levels, and the evolution and diversity of ocean plankton. Joyce has brought the extraordinary riches of the Cretaceous and Neogene Tanzanian sedimentary succession to the wider academic community through many years of enthusiastic collaboration with researchers from many countries. None of the extensive body of work in Tanzania published in the last twenty years would have been possible without her knowledge of the sedimentary succession onshore and offshore, her commitment to fully developing the scientific potential of the succession, and her irrepressible enthusiasm helping to organize fieldwork in often remote areas. ‘Tanzania style’ preservation in hemipelagic clays is now actively sought out by palaeoclimate and palaebiology researchers on land and in deep sea drilling projects and has been recorded in various places. However, no single locality can match the extraordinarily long and rich Aptian to Miocene record provided by the original, which Joyce has helped bring to the world’s attention.

Keep up to date with our department's activities and research spotlights