What does the House of Lords do? 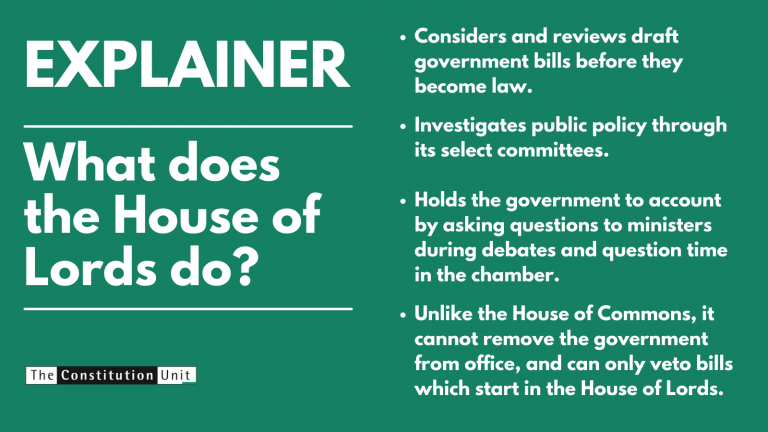 Members of the House of Lords spend a lot of their time considering draft government bills before they become law. However, any proposed amendments to legislation must also be agreed by the Commons. Its primary function is therefore as a ‘revising’ chamber, asking the Commons to reconsider its plans.

Through the work of parliamentary select committees, peers investigate public policy covering a wide range of public policy, from justice and home affairs, to the long-term sustainability of the NHS. Committees produce reports which can often directly or indirectly influence the formulation of government policy.

Holding the government to account is another function of the Lords. During question time and debates in the chamber members put questions to government ministers who must respond.

It is very rare for peers to try to overrule legislation passed by the House of Commons as a whole. Under the Salisbury Convention the House of Lords does not try to block bills that were promised in the governing party’s manifesto, and rarely blocks any bill in its entirety. In general, the unelected House of Lords defers to the Commons’ democratic mandate, but makes proposals for MPs to think again.

As it does not hold a majority, the government is defeated in the House of Lords quite often, generally on amendments to bills. Constitution Unit research shows that in recent years just under half of defeats have gone on to be accepted by the House of Commons, leaving a lasting impact on policy. A high-profile example under the Labour government occurred in 2006, when the House of Lords repeatedly voted against compulsory ID cards. The government chose to delay the implementation of ID cards until after the 2010 election. That election resulted in a Conservative-Liberal Democrat coalition government, which went on to scrap ID cards. This episode was highly adversarial, but more commonly members of the Lords propose changes which the government accepts, in order to improve the substance of legislation.

The House of Lords is equipped to perform this ‘revising’ role due to the wide range of expertise and experiences of its members, and its independence of thought—a large proportion of its members have no political affiliation. Some members are former politicians, while others are expert in business, education, science, and other public policy areas. Of the around 800 members, most have been appointed as 'life peers' by the Queen on advice of consecutive Prime Minsters; the rest comprise 92 hereditary peers and 26 Church of England Archbishops and Bishops.

Many call for reform of the Lords, primarily due to it not being elected by popular vote. There are many options for reform but history demonstrates how tricky reform is. It is widely argued that one of the most urgent reforms needed is to contain the ballooning size of the Lords by restricting the Prime Minister’s power to appoint new peers.