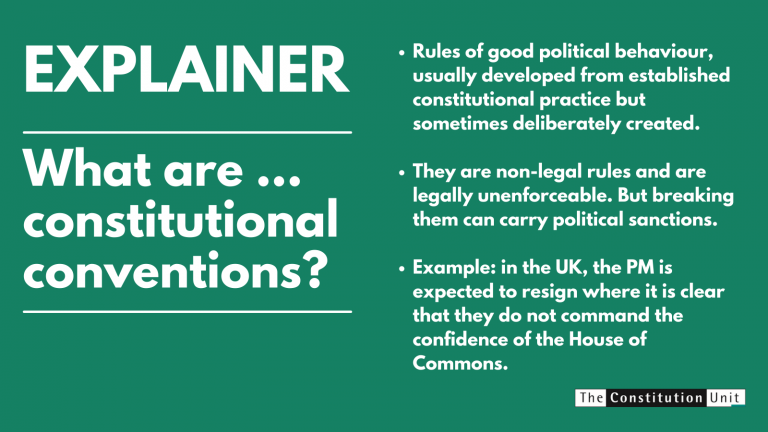 Constitutional conventions are rules of good political behaviour. They are typically rules of self-restraint, not exercising powers to the full. They usually develop from established constitutional practice, but sometimes are deliberately created; and to count as a convention, they must be generally accepted to be binding. In the UK’s constitutional arrangement, one well-known convention is that the Prime Minister is expected to resign where it is clear that he or she does not command the confidence of the House of Commons and an alternative government does.

The fact that such rules are non-legal—and so legally unenforceable—does not mean that they lack enforcers, or sanctions; though these will be political, not legal in nature. Nor does this mean they are unimportant, compared to legal rules: on the contrary, conventions play a key role in the British constitution, and in other constitutions as well. They ensure that the constitution operates in accordance with prevailing constitutional values; existing conventions may evolve, and new ones emerge, in line with changing practice and changing attitudes. In this way, significant constitutional change can occur, over time, without any fundamental change in the law.

These are just a few of the main conventions.  The Cabinet Manual sets out the main constitutional conventions, and the Ministerial Code the standards of conduct expected of ministers. Sharpe lists 40 parliamentary conventions; the Guide to Judicial Conduct contains detailed rules to ensure that judges do not undermine public confidence in the judiciary.  Conventions have increasingly been codified in official guidance of this kind; a few conventions have even been codified in statute.  For example, the Lord Chancellor is now under a statutory duty to uphold judicial independence; the Sewel convention was enshrined in the Scotland Act 2016.  But in the Miller case the Supreme Court held the Sewel convention was still not legally enforceable.

Political conventions are inherently flexible, and do not always have close or singular definitions. Three of those listed above contain the word ‘normally’. Sharpe’s list of 40 parliamentary conventions mentions six which are now questioned.  As one example, since the 2003 invasion of Iraq there appeared to be a convention that the government would not commit troops overseas without a prior debate and vote in Parliament. That was called into question when in April 2018 Prime Minister Theresa May authorised airstrikes on Syria. So some conventions are firmer and clearer than others; all conventions can evolve; and when conventions are stress tested at times of political or constitutional crisis, they can evolve quite rapidly.