What is a constitution? 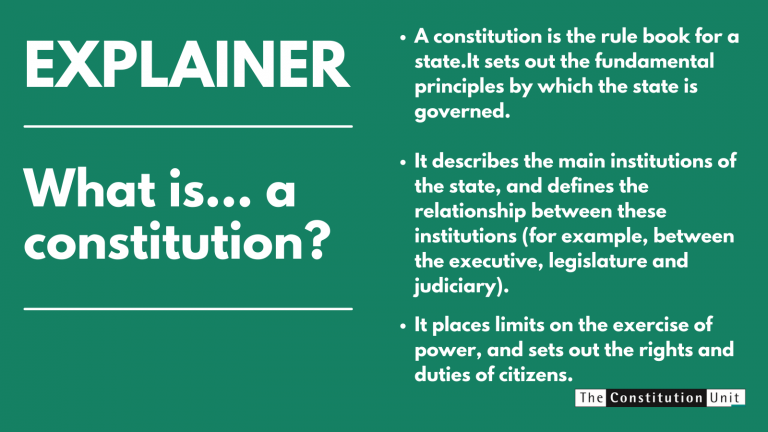 A constitution is the rule book for a state.  It sets out the fundamental principles by which the state is governed.  It describes the main institutions of the state, and defines the relationship between these institutions (for example, between the executive, legislature and judiciary).  It places limits on the exercise of power, and sets out the rights and duties of citizens.

Most countries have the rule book codified in a single document, known as a codified (or written) constitution. Codified constitutions are typically produced following a revolution (like the American constitution of 1787 or the French constitution of 1791); or total defeat in war (like the post-war constitutions of Germany and Japan); or a complete collapse of legitimacy of the previous system of government (like post-apartheid South Africa, or post-Soviet Russia); or the attainment of independence (like all the countries of the former British empire). None of these things have happened to the UK, which is why it has never had cause to codify its constitution. (Our one revolution, in the 17th century, did briefly produce a written constitution: Cromwell’s Instrument of Government).

Codified constitutions contain fundamental, superior law, and are harder to amend than ordinary law. Constitutional change typically involves approval by a super-majority in the legislature, or a referendum, or sometimes both. For example, an amendment of the Japanese constitution requires approval by a super majority of two-thirds of both houses of the Diet, and then by simple majority in a popular referendum.  Amendment of the US constitution requires a two thirds vote in both Houses of Congress, followed by ratification by three quarters (38 out of 50) of all the state legislatures.