About the W.H. Bragg Lecture

In 2004 UCL's Department of Physics and Astronomy decided to establish a series of annual lectures celebrating major advances in condensed matter physics. The series was named after William Henry Bragg, who was the Head of Department from 1915 to 1923. X-ray diffraction analysis of crystal structures began with W. H. Bragg's instrumentation and insight, and with the availability of synchrotron sources it has developed into an important tool in modern biology.

"So much has been said about entropy that it is probably best to remain silent on the subject. Somewhat unwisely, I will nevertheless talk about this dangerous subject because in numerical simulations one is confronted very directly with what entropy is - and, more importantly, with what it is not.

I will talk about entropy from the perspective of numerical simulations. Specifically, I will discuss (well known) examples where entropy increases with increasing order, I will discuss how recent numerical tools allow us to compute close and distant relatives of the Statistical Mechanical entropy, and finally I will briefly touch on Gibbs’ paradox." 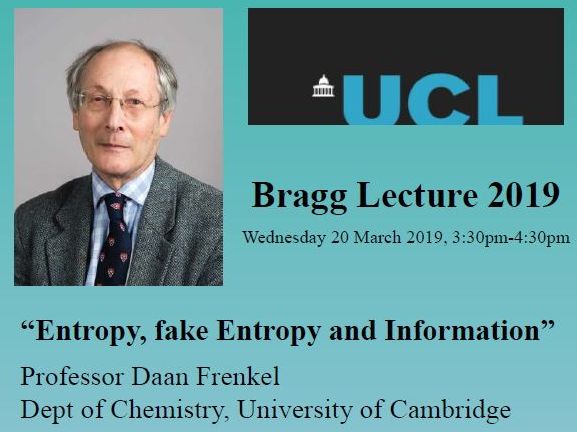