Researchers at the UCL Centre for Advanced Biomedical Imaging (CABI) have embarked on a rather unique 'Easter egg hunt' and have been scanning chicken eggs for a new Channel 4 programme: Easter Eggs Live! CABI scientists have used magnetic resonance imaging (MRI) to peer beneath the shell of a developing chicken egg to visualise the growth and position of the chick as it prepares to hatch. 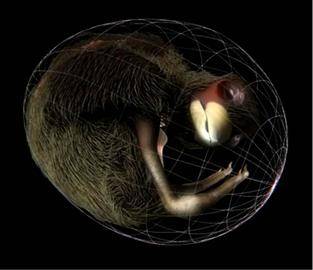 "This collaboration builds on previous work in CABI, where we have used high resolution MRI to image embryos and search for genes involved with hole in the heart in babies.  Here, we have captured a unique view of the chick's final movements after it has ruptured the air sac and prepares to hatch using an MRI scanner." - Prof Mark Lythgoe

The egg was secured in a bed of cotton wool to keep it safe and warm, before scanning commenced.  This was also a rare opportunity for the camera crew to film in close proximity to the MRI scanner to capture footage of the egg entering the magnet.

The MR images revealed the developing organs of the chick:

"The egg was scanned several times over the course of the gestation. The images were used to generate a 3D animation of the chick breaking into the air sac and breathing for the first time, before the hatching process began." - Holly Holmes