The following timeline documents interactions between Eran Elhaik, some of the contributors to this website and various academic colleagues. This page is a work in progress and we welcome any additions and corrections.

N.B. Elhaik’s PhD supervisor, Dan Graur, was appointed as an associate editor of Genome Biology and Evolution in 2009 and served in this position until about 2018. Interestingly Elhaik posted on Facebook that he had trouble getting the article published in conventional journals: 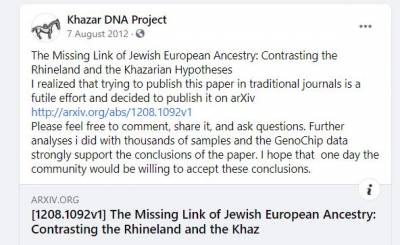 Response by Danielle Venton: “Highlight: out of Khazaria—evidence for “Jewish genome” lacking”

Response by Behar et al in Human Biology “No evidence from genome-wide data of a Khazar origin for the Ashkenazi Jews”.

Blog post by Elhaik in response to Behar with weird references to Bugs Bunny.

Critique of Elhaik paper in the Jewish Review of Books by Shaul Stampfer.

Publication of a paper in the American Journal of Human Genetics by Mendez et al “An African American paternal lineage adds an extremely ancient root to the human Y chromosome phylogenetic tree”. The authors include UCL’s Mark Thomas.

Eran Elhaik publishes a bizarre YouTube video in response to the haplogroup A00 paper with references to the space-time paradox and zoophilia. He accuses Mendez et al of using “inadequate statistical and analytic methods” and “data manipulation”.

Publication of a letter by Eran Elhaik, Tatiana Tatarinova, Anatole Klyosov and Dan Graur in the European Journal of Human Genetics criticising the conclusions of Mendez et al: “The ‘extremely ancient’ chromosome that isn’t: a forensic bioinformatic investigation of Albert Perry’s X-degenerate portion of the Y chromosome”:

Note that Dan Graur is Elhaik’s PhD supervisor. According to Anatole Klyosov’s entry on Wikipedia his DNA work has been dismissed as pseudoscience: See also the entry on our genetic astrology website on his “Into Africa theory”.

The claims of statistical errors and data manipulation were repeated in an interview with Eran Elhaik published in a blog post by his PhD supervisor Dan Graur.

Mendez et al published a reply to Elhaik et al in the European Journal of Human Genetics pointing out that the authors' criticisms resulted from "a misunderstanding of population genetic theory, as well as a misrepresentation of the methodology of Mendez et al". They also discussed the "technical and conceptual flaws" that undermined the claims:

A more detailed rebuttal pointing out additional errors of understanding was published as Supplementary Information to the paper.

A response to the letter from Mendez et al by Elhaik et al was published in the European Journal of Human Genetics:

Elhaik et al published an extended version of their EJHG letter on Haldane’s Sieve. They claimed that their reply was “vasectomized” and they were censored for being “too sarcastic and inflamed”:

Elhaik also wrote a bizarre blog post about the affair.

Correspondence between Eran Elhaik and Thomas Krahn relating to the haplogroup A00 paper is published in an anonymous blog post by M on the Homolog blog with accusations against Michael Hammer and Joe Pickrell.

Publication of a paper in Genome Research by Karmin et al. titled ‘A recent bottleneck of Y chromosome diversity coincides with a global change in culture’ where they estimate the TMRCA of Y chromosomes in modern humans to be 254 (95% CI 192 - 307) thousand years".

Publication in the American Journal of Human Genetics by Mendez et al “The Divergence of Neandertal and Modern Human Y Chromosomes” where they estimate the TMRCA of Y chromosomes in modern humans to be 275 (95% CI 241 - 305) thousand years.

A range of estimates for the Y chromosome TMRCA exist. Such estimates are based on different data, different assumptions about the mutation rate and process, and different mathematical approaches. Population geneticists usually try to incorporate uncertainties about the mutation rate and process, as well as other factors, into their calculations. While it is unlikely that they factor in all the sources of error, they typically report their TMRCA estimates with confidence intervals; the more sources of error that are considered, the wider the confidence interval. It is worth noting that all four published estimates of the TMRCA of Y chromosomes in modern humans mentioned above – including those published by Elhaik et al and Mendez et al – have substantial overlap in their confidence intervals (see figure below). It is also worth noting that if we knew the exact TMRCA for the Y chromosome in modern humans with absolute confidence, this date would tell us very little about the evolution of our species.

It is therefore puzzling that Eran Elhaik should be so impassioned, and in places, rude about other researchers’ estimates of this rather trivial date. 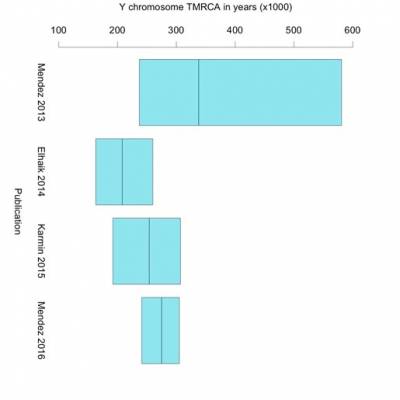 Is Yiddish to be traced to Turkey? Response to Das et al by linguist Asya Pereltsvaig:

Article by Pavel Flegontov on his blog: “How to make money on noise: a GPS saga”:

Elhaik gives a talk at Rootstech in Salt Lake City in which he claims that Debbie Kennett endorsed his GPS Origins DNA test:

Debbie Kennett wrote to Eran Elhaik setting him straight about the endorsement. No response was received.

Debbie Kennett wrote to Rootstech advising them about the false endorsement.

Publication of an article in Forbes by Jennifer Raff reviewing the Primeval DNA test which was developed by Elhaik for DNA Consultants:

N.B. At some point after April 2019, the Primeval DNA test was rebranded as the “Rare Genes from History DNA Test”.

Response from Eran Elhaik on his Khazar DNA Project blog:

Response stored in the Internet Archive.

Back up on Archive.

Authorship of article confirmed by tweets from Eran Elhaik preserved by Archive.is.

Elhaik posts a tweet likening AR, MGT and DAK to the mafia. 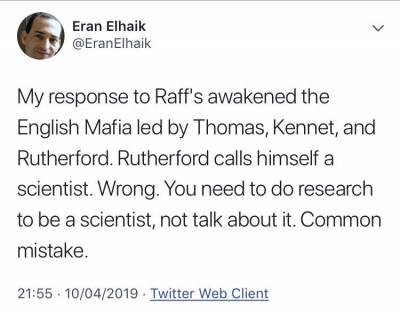 Ezgi Altinisik reveals on Twitter that she has been sued by one of Elhaik’s Turkish followers:

The full story is in this Google Doc.

It is archived here.

A revised and toned down version of the blog post is published.

Elhaik publishes a blog post entitled: “Are there undeclared commercial ties between Prof. Mark Thomas and Living DNA”. He also makes insinuations against DAK, Adam Rutherford and Jennifer Raff. The blog post has since been removed but we have retained an archive version here.

Preserved in the Internet Archive.

Back up copy on Archive.is.

Article in Jewish newspaper about the Primeval DNA test.

Interview with Eran Elhaik (in English) in a Russian newspaper.

An article in the Yorkshire Post from a reporter who was invited to take the Primeval DNA Test and who found that he had a 6.5% similarity with the Chumash Paleo-Indians:

MGT was contacted by a Senior Editor at Nature Ecology and Evolution concerning a recent paper in the journal entitled “Ancient genomes indicate population replacement in Early Neolithic Britain”, on which he was a co-author.  A reader had brought to their attention that MGT was “affiliated with Living DNA, a UK genetic testing company”, but that he hadn’t declared this “affiliation in the Competing Interests statement of the paper”  MGT was invited to publish a correction. MGT responded on 30th April to clarify that he has “never received any money or other benefits (including genetic tests)” from Living DNA, that he has no financial interests in Living DNA and has not publicly endorsed them. The editor responded on 2nd May. She agreed that there was no conflict of interest to declare and that no action was needed..

Elhaik publishes another defamatory attack against other scientists falsely accusing Doron Behar, Michael Hammer and Mark Thomas of failing to declare a conflict of interest:

Elhaik publishes a review of Adam Rutherford’s book How To Argue With a Racist which includes a number of defamatory comments including an accusation that Rutherford is anti-semitic. The review was changed multiple times after publication. See this Twitter thread from AR.

Later versions of the review which included the anti-semitic comment have been captured by the Wayback Machine.

An additional copy is available on Archive.is.

The current published version can be found here.

A similar review of the book was also published on Amazon. See this Twitter thread from AR.

EE publishes a blog post announcing the launch of a new Bronze Age DNA test available on the GenePlaza website:

A follow up blog post was published promoting the Bronze Age DNA test from GenePlaza for DNA Day.

Publication of a preprint Why most principal component analyses (PCA) in population genetics are wrong.

Publication of a paper with Hannah Carress and Daniel Lawson on “Population genetic considerations for using biobanks as international resources in the pandemic era and beyond”:

Publication of a paper in Microbiome on “The impact of cross-kingdom molecular forensics on genetic privacy”.

Profile on the website of the predatory journal Frontiers in Genetics