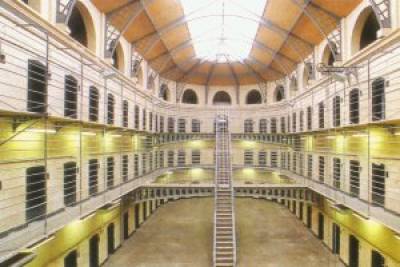 The east wing of Kilmainham Gaol opened in 1864, and 'was enthusiastically received with its 'panoptic design'. The design was modelled on that of Pentonville Prison, and like it was a '3 storey high, barrel vaulted space, lined on either side with a network of iron galleries and catwalks. The overall view from the hall demonstrated an ordered vista of salubrius space showing separate confinement from outside of the cell door without the visibility of the human form cornered in the wretchedness of isolation.' Freida Kelly A History of Kilmainhan Gaol: the dismal house of little ease (1998), p. 83. Here the claim is made because of the 'overall view from the hall'. For Bentham the method of inspection meant far more than this. He did not invent the 'inspection principle' but his particular architectural solution to the problem of surveillance was original and facilitated uncertainty in the prisoner in a particularly powerful way. Kilmainham, and the other Pentonville clones, are pale approximations.