Between the years 1814 and 1818 Bentham rented as a country residence Ford Abbey in what was then Devonshire, and is now Dorset. He lived at Ford Abbey from July until January/February of the following year. Always accompanied by James Mill and his growing family, Bentham also invited friends to spend some time there: visitors including James Hume, David Ricardo, Jean Baptiste Say, and Francis Horner stayed at Ford Abbey. Two of Bentham's oldest and dearest friends were Sir Samuel and Lady Anne Romilly who stayed with Bentham from Thursday 25 until Monday 29 September 1817. Much to Bentham's delight Anne Romilly sketched the Abbey, and on the Romillys' departure Bentham wrote to a friend:

Lady R. spite of the inclemency of the season, in the interval of the rains sat down in Tempe, and from two different spots took two different sketches of the building, both much superior to any of those which we have seen in print or manuscript. I gave some hints about multiplication, and whether by drawings or engravings am not altogether without hopes of seeing that useful rule of arithmetic employed upon the subject in some shape or other to my advantage.

Within just a year and one month on 29 October 1818 Anne Romilly died, and Samuel Romilly stricken with grief committed suicide on 2 November 1818.

By what means we have yet to discover, but somehow one at least of Anne Romilly's sketches of Ford Abbey was, as Bentham desired, engraved. The sketch was drawn by George B. Campion (1796-1870), and engraved by Thomas Higham (1796-1844), and in 1829 appeared in Revd Thomas Moore, The History of Devonshire from the earliest period to the present, ... Illustrated by a series of Views, drawn & engraved under the direction of William Deeble, 3 vols., London, 1829-30. The engraving of Ford Abbey appeared in the first volume of the work entitled Biography, opposite page 472. 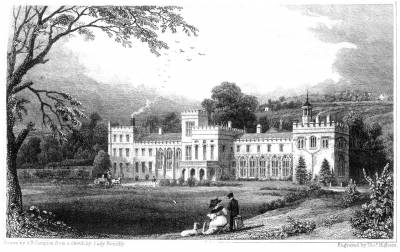 Whether Lady Romilly included herself in the sketch, and whether the plants and flowers on the right hand side of the sketch are accurate representations of plants at the Abbey, we cannot know; but one detail particularly reveals to us one of Bentham's innovations at Ford Abbey. Bentham was a keen gardener and by his own account had spent between £60 and £80 on fruit trees, shrubs, and flowers. In a letter to the owner of Ford Abbey he wrote: 'Fresh walls have been built, others raised, at my expense: every bit of wall that would receive a fruit tree has received one.' To the left of the Abbey can just be made out a row of trees espaliered to a wall.