Cycling In London: In the light of the pandemic, cycling is one of the safest and greenest forms of transport. How can we make this healthy and sustainable behaviour last?

The Bartlett School of Environment, Energy and Resources at UCL put on their first ever 48-hour hackathon this June. Titled Bartlett Hacks: Climate Solutions in a time of pandemic, the competition aimed to generate ideas for a “better, healthier, future for everybody.” As students in the MSc Behaviour Change programme at UCL, we entered both to have a change of pace from writing our dissertations and to have an opportunity to put what we’ve learned over the past year into practice. To our pleasant surprise, our submission suggesting three orchestrated measures to encourage commuting by bicycle in London tied for first place.

The MSc Behaviour Change programme has taught us many things, but first and foremost among them is the desirability of following a systematic process for developing behaviour change interventions. Proposed interventions should be supported by a strong theoretical rationale based on evidence in order to avoid designing by the ISLAGIATT principle. However, given the limited timeframe of the hackathon, we were unable to gather our own data through surveys and behavioural outcome measures. Instead, we found dependable sources (published research and government data) to provide us with the information we needed to support our proposal.

The beginning of any intervention development process should always be the identification of a desired outcome. To reflect the climate change theme of Bartlett Hacks, as well as ourselves being sustainability-minded individuals, we chose reducing greenhouse gas emissions as our desired outcome. After all, “greenhouse gases from human activities are the most significant driver of observed climate change since the mid-20th century”. Given that 27% of all greenhouse gas emissions in the UK come from transportation, we decided to focus on transportation-related behaviours to influence that outcome.

To reflect the time constraints of the 48 hour hackathon format we focused on a few main potential behaviours before landing on one behavioural driver:  to reduce transportation-related greenhouse gas emissions. We chose cycling to and from work as the basis for our hackathon proposal. A few of our team members, Kezia Stewart, Frieda Altgelt, and Alex Voica, were already experienced cyclists before the pandemic. While the rest of us, Natalia Gómez Sicard, Tishara Rajagopal, and Alex Moog, began to use London’s cycling network as a replacement for public transportation. We chose this not simply due to our familiarity with the subject, but also due to the unique opportunity that the pandemic provides for expanding this healthy and climate-friendly behaviour.

Cycling has increased by more than 100% in England and Scotland during the pandemic, which is no real surprise given the rise in fear of contagion when travelling on public transportation. Previous studies have shown that sudden shocks to an individual’s routine can have long-lasting consequences for behaviour change. For instance, delays and closings as a result of the London Tube strikes in 2014 caused millions of people to experiment with new ways to commute to work. About one in twenty maintained their new mode of travel once the strikes ended. Whilst this may not seem like much a small percentage (say, 5%) of a large number represents a significant gain in terms of impact. Our objective was to take the recent increase in cycling and find ways to get more people to stick with it (i.e. maintenance of behaviour) once their old mode of travel was available again.

Barriers to Cycling in London 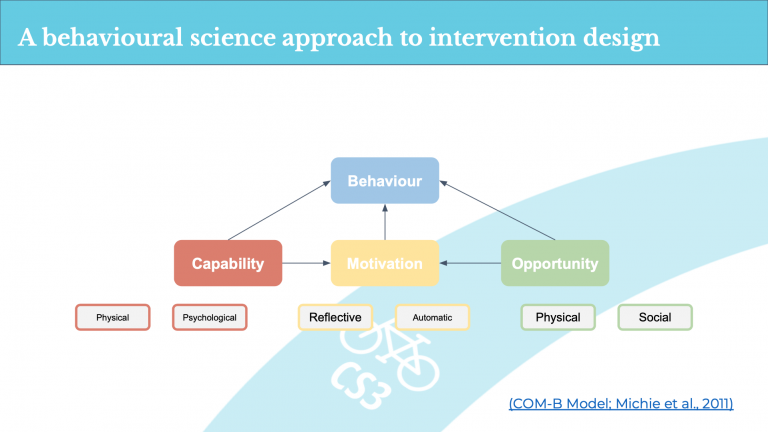 Following the specification of a target behaviour, we proceeded to examine the main barriers and facilitators to cycling, specifically in the London context. It is here that we applied the COM-B Model (Figure 1) as a framework to explore these. After considering each domain, Capability, Opportunity, and Motivation, and their respective subdomains the literature revealed a few key barriers.

The first barrier, the lack of proper cycling infrastructure on London’s streets, mapped to the COM-B domain Physical Opportunity. While individuals are theoretically allowed to cycle on nearly any London street, many people find the lack of dedicated bike lanes on most streets off-putting. The second barrier fell under the domain Automatic Motivation. Potential cyclists are fearful of getting into accidents with cars or other cyclists, and therefore the perceived safety of cycling in London is relatively low. And the third barrier, under Social Opportunity, is the perceived exclusivity of cycling in London. This means that people who feel that they don’t have the “right” age, ethnicity, or fitness level consider it ‘socially unacceptable’ for them to cycle. For instance, over 25% of non-cyclists in London think they’re not fit enough to cycle. Consequently, the solutions we propose each target one or more of these barriers. Our proposed intervention consists of three parts. 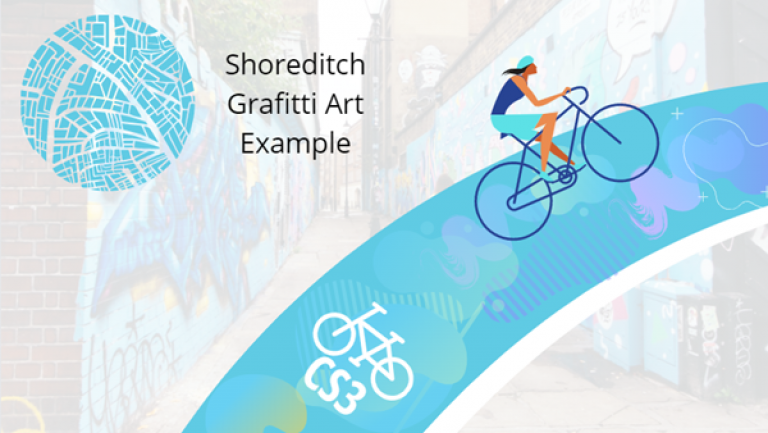 Figure 2: Painted Paths: Mock up of the paths in the area of Shoreditch where graffiti art is prominent and may be the unique art style communities choose for the cycle paths, to link to the area.

The first aspect of our proposal, Painted Paths, aims to reduce all three of the key barriers. We believe that a program of expanded bike paths that are designed and painted by local communities will have the dual effects of extending safe infrastructure and allying London’s communities with cycling culture. This participatory approach has been shown to increase a sense of belonging and create positive associations with projects and related outcomes. 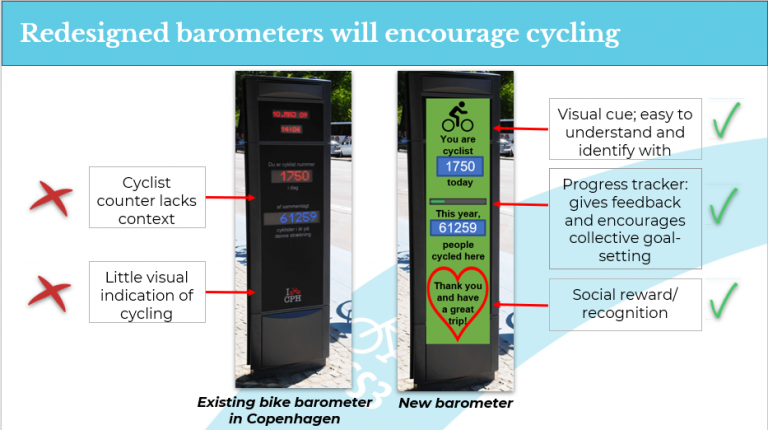 Figure 3 - Bike Barometers: Above shows our behaviourally driven mock up on the right, with improvements made upon the existing barometers in Copenhagen (on left).

The second part of our proposed intervention is the use of Bicycle Barometers on London streets. These counting machines measure and display the number of cyclists that pass them on a daily, and sometimes yearly basis. They are used in other European cities like Stockholm and Copenhagen to encourage non-cyclists to cycle more. We believe that expanding bicycle barometers in London, and giving them a design overhaul, is an effective way of increasing positive social norms around cycling, and bringing attention to cycling as a mode of travel for pedestrians who haven’t previously considered it. Safety Nudges: these have been used elsewhere to increase the perception of speed that cyclists are aware of, enhancing visual cues that lead them to slow down.

The third part of our proposed intervention involves updating new and existing bike paths with additional Safety Nudges. One of the reasons that new cyclists feel unsafe is due to faster cyclists passing them by. The first of our proposed nudges aims to slow down cyclists at busy intersections by painting traverse strips, or horizontal lines, closer and closer together as they approach the intersection. This visual trick makes it appear to the cyclist that they are speeding up, and therefore they naturally slow down to compensate. This has been shown in other cities where similar measures were implemented. The second nudge we propose is to visually narrow the lanes as cyclists approach the intersection, which also gives the impression of speed and increased safety. Ultimately, these visual nudges are a cost-effective way to make new cyclists feel safer while they share the bike paths with experienced cyclists.

Our hackathon proposal consisted of a three-pronged intervenion, Painted Paths, Bicyle Barometers and Safety Nudges to tackle the key barriers we identified in our behavioural analysis. Highlighting the 'powerful behavioural perspective combined with imaginative ways of engaging local communities', the Bartless Hacks judges, leading experts in the field of climate change mitigation and adaption, chose our proposal alongside two other London cycling proposals as the winners of this year's hackathon. Watch the full video submission here.

We are very glad to have been able to participate in the first BartlettHacks this year. Finding ways to create some positive outcomes out of the pandemic is an admirable goal, and The Bartlett School held an open and supportive hackathon in reach of it. Not only did this experience allow us to engage in a positive and creative problem-solving process, but it also gave us the opportunity to apply our newly gained skills to relevant issues. We hope that by collaborating with the other winning teams, this project will generate positive impact in our communities and for the planet as a whole. The MSc Behaviour Change has given us the tools to understand and target behaviours using a systematic approach to exploring the psychological and environmental factors that influence them. These tools will stay with us as we go forward with the aspiration to continue facilitating positive social and environmental change.