A group of London Summer School students have called for “a re-stitching of the fabric of our global economies”, through greater integration of action on climate change with the broader agenda of the Sustainable Development Goals (SDGs). 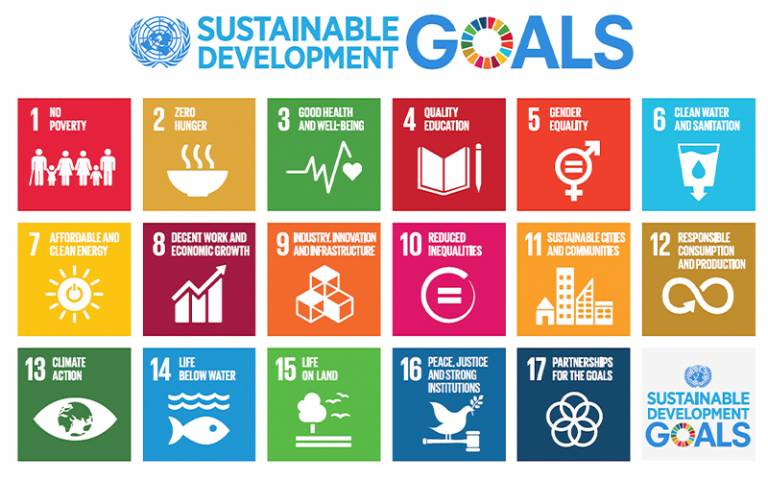 The group of 20 A-level students from schools and colleges across London, were taking part in a 3-day Summer School in August 2019, organised by the UCL Institute for Sustainable Resources, the UCL Energy Institute, and the national educational charity IntoUniversity, which supports young people from disadvantaged backgrounds to attain either a university place or another chosen aspiration.

Rasheed Eyitayo-Olonade considers the interactions between achieving food security, as part of SDG 2, and addressing climate change. He writes that “to combine these two important goals together will be challenging. Countries will have to think about the effects on civilians, and the economic implications.” Specifically, Rasheed focusses on the production of fertiliser. “Despite this process having a range of advantages on the growth of a variety of crops, it produces carbon dioxide from the reforming of natural gas. If we tried to incorporate the idea of reducing climate change with increasing food security, we would have to find alternative methods of producing fertilisers. At the same time, if we continue to produce fertilisers from non-renewable resources, then we will not achieve long-term food security as fossil fuels are finite resources.” However, Rasheed emphasises the importance of innovation in offering potential long-term solutions, as “if we use renewable resources to produce fertilisers, for example biofuels or the electrolysis of water, we could achieve food security without adding to climate change. The only aspect of the combination of the two plans is that food security will be obtained potentially more slowly, but will be indefinite.”

Eusra Mahadi considers the challenges of addressing all of the SDGs while also addressing climate change, noting that “challenges are much greater for undeveloped countries than developed countries at this stage.” For example, SDG 9 aims to “build resilient infrastructure, promote inclusive and sustainable industrialisation and foster innovation”. As Eusra explains, this implies that “countries should focus on affordable and equitable access for all such as trans-border infrastructure which will support economic development and human well-being, retrofitting industries to make them sustainable, efficient and innovative. However, this change and innovation is more feasible in developed countries such as UK, USA and the UAE, and much harder in poorer countries in areas such as South America, Africa, Asia.” Eusra also draws attention to rising emissions in emerging economies such as China, driven by “the country’s large economy and population” and by “surplus production”. However, Eusra argues that limiting climate change to 1.5°C does not have to be contradictory to the priorities of developing and emerging economies. For example, “China has stated that their main concerns and priorities are taking care of their economic development, decreasing the overheating economy and also addressing concerns with local air quality issues. These all will be improved if carbon emissions are decreased drastically and also the temperature rise is limited to 1.5°C.”

Emphasising synergies, while minimising trade-offs, between climate action and the SDGs

Antonia Antrobus-Higgins observes that recent media coverage of climate change, and its description by the UN Secretary-General as a “direct existential threat”, has meant that at the present moment “climate change is more centre-stage in the public consciousness than sustainable development.” However, “the unsustainable model of development which allowed for the current developed countries to industrialise has significantly contributed to climate change. Therefore, it is not a question of whether the world can address both climate change and sustainable development, but rather that in doing so effectively they both should be addressed as they are inextricably linked.” Antonia argues that “the increasing threat of climate change has demonstrated that all ‘developed countries’ have not developed sustainably. Therefore, there needs to be a re-stitching of the fabric of our global economies, so they function in a way that does not compromise the needs of future generations.” This process has to acknowledge that “the detrimental effects of climate change constitute a major threat to achieving the SDGs. National efforts at ensuring adaptation and building resilience to climate change can only work if there is a strategy to implement the SDGs across sectors.” Antonia also draws attention to possible trade-offs between climate action and the wider SDG agenda, observing that “climate policies, ‘if not properly designed can be socially and economically regressive’ (Fuso Nerini et al, 2019) and could disproportionally impact certain economies and people in the short term. Therefore, the world can’t focus on achieving the SDGs without also trying to limit climate change to 1.5°C because they are not in two separate silos, but are two sides of the same coin.”

Hope for the future

The UCL Institute for Sustainable Resources and the UCL Energy Institute are extremely grateful to all of the students who took part in the Summer School, and to IntoUniversity for their support. The UCL staff were encouraged and inspired to work with such a thoughtful and perceptive group of students, who showed great resilience, creativity and curiosity in addressing these important and complex questions. The talent and commitment of these young people is a source of great hope for the future.