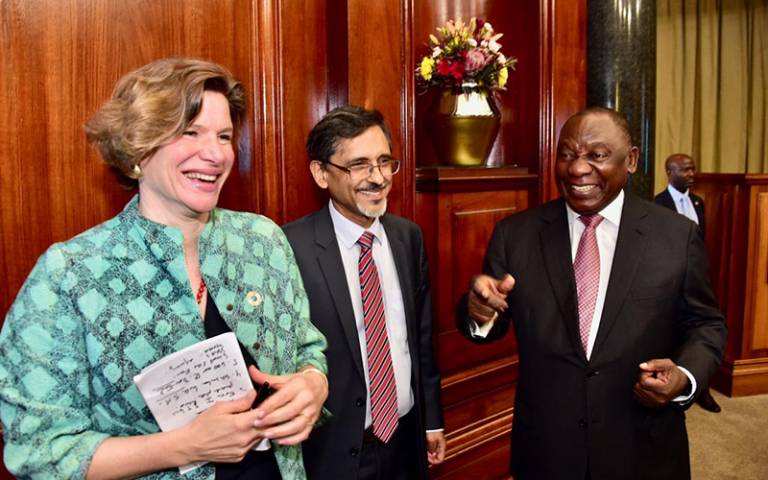 In October 2019, IIPP Director Professor Mariana Mazzucato was appointed by South African President Cyril Ramaphosa to his Economic Advisory Council (PEAC). The Council was announced by President Ramaphosa in the State of the Nation Address to ensure greater coherence and consistency in the implementation of economic policy and ensure that government and society in general is better equipped to respond to changing economic circumstances. In March 2020, Professor Mazzucato participated in a PEAC meeting in Pretoria, where she presented mission-oriented innovation and industrial strategy to the entire South African cabinet.

Since March, the work of PEAC has pivoted towards the government’s response to the COVID19 crisis and Professor Mariana has participated in meetings with President Ramaphosa, government ministers and PEAC members, and has contributed to a paper by a PEAC sub-team on the government’s Growth and Reconstruction Programme post-COVID. She is also focussing her more long-term contributions to PEAC on industrial strategy, state capacity and the green transition.

IIPP Head of Research Dr Antonio Andreoni is also working on the South African economy. Dr Andreoni has been affiliated to the Industrial Development Think Tank funded by the South African Government's Department of Trade and Industry (DTI) and the SARChI Industrial Development, University of Johannesburg. In 2020 Dr Andreoni was also appointed Visiting Associate Professor in the Fourth Industrial Revolution at the University of Johannesburg.