Schumpeter’s creative destruction as a radical departure: A new paradigm for analysing capitalism 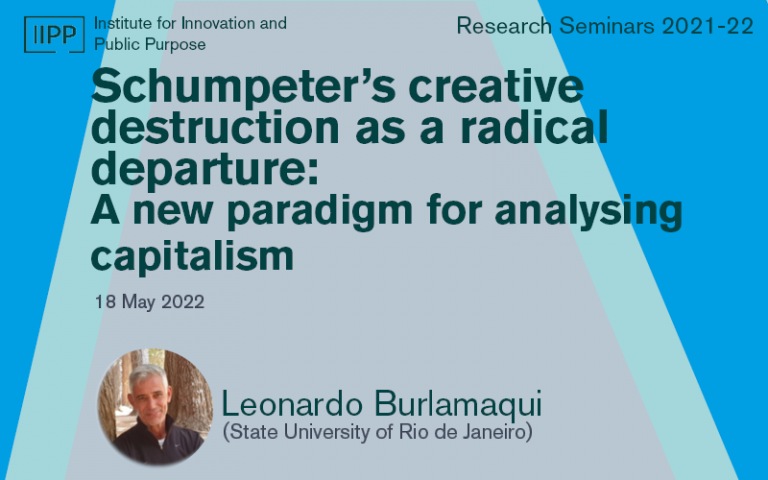 Join us to hear Leonardo Burlamaqui talk about his recent research on 'Schumpeter’s creative destruction as a radical departure: A new paradigm for analysing capitalism'. This talk will be chaired by Rosie Collington, IIPP PhD student, with a discussion from Jose Alejandro Coronado Arciniegas, IIPP Research Fellow. Followed by questions from the audience.

This seminar explores Leonardo Burlamaqui's recent paper: 'Schumpeter’s creative destruction as a radical departure: A new paradigm for analysing capitalism' that attempts to show that Capitalism, Socialism and Democracy (CSD) provides us with a major rupture within Schumpeter’s previous theoretical work and offers the seeds for a new framework for economic analysis. The key proposition is that until that CSD, where the “creative destruction paradigm” is born, Schumpeter’s theory was an incoherent attempt to merge equilibrium and evolution, Walras and Marx. More precisely, that previously to CSD, Schumpeter’s theory of development was a theory of cycles rooted in equilibrium, and one which gets more complicated and out of touch with actual capitalist dynamics as he moves from the basic Juglar cycle, incorporated in his Theory of Economic Development (TED) towards the attempts, in Business Cycles (BC), to “merge” three different cycles (Juglar, Kondratieff and Kitchins), all rooted in equilibrium as well, and apply the resulting scaffolding to an historical interpretation of capitalist evolution since the industrial revolution.

The paper’s core contribution is a reinterpretation of Schumpeter’s development theory, through the “creative destruction paradigm” provided in CSD. By linking the core propositions of the latter with the brilliant, but underdeveloped, innovations from TED and some largely ignored historical and institutional insights provided in BC, the seeds of a new analytical framework emerge. One which is completely out of equilibrium, centred on finance, entrepreneurial action, uncertainty, institutions, and competition by means of innovations. Although promising, this new framework has yet to be properly developed. Bridging its core propositions with Keynes uncertainty-based theory of investment and Minsky’s financial fragility hypothesis is suggested by way of conclusion. Leonardo Burlamaqui is Professor at the Department of Economic Evolution, State University of Rio de Janeiro, Research Scholar at the Levy Economics Institute – Bard College (New York), and a Senior Fellow at the Brazilian Center for International Relations. Burlamaqui is also an Adjunct Professor at Graduate Program in Public Policies and Development Strategies at the Federal University at Rio de Janeiro, a member of the International Joseph Schumpeter Society and a contributing editor to the Post Keynesian Economics Forum. Previously he was a Senior Program Officer at The Ford Foundation in New York, directing the Reforming Global Financial Governance initiative. He has a PhD in Economics, awarded by the Federal University at Rio de Janeiro. Burlamaqui has taught, written, and published extensively on innovation and competition, development strategies, intellectual property, institutions and economic change, Asian capitalism and the political economy of knowledge and finance. More about Leonardo Burlamaqui