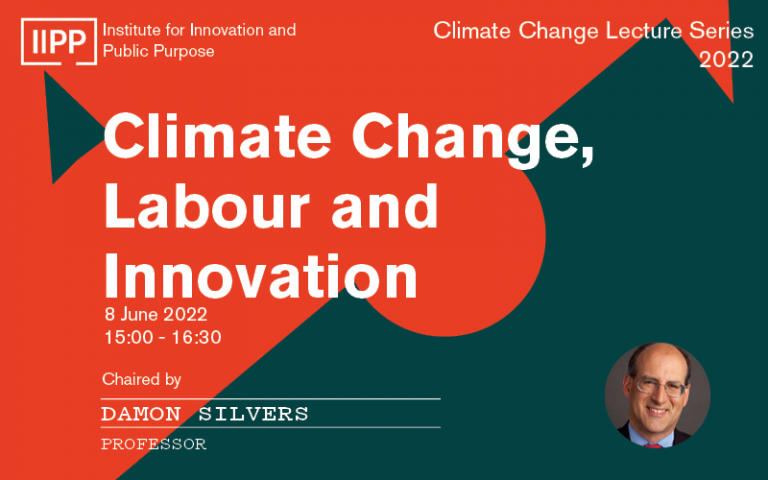 The final talk in the Climate Change, Labour and Innovation Lecture Series will explore the nature of climate change as a public policy challenge and the centrality of labour policy to successfully addressing that challenge. Professor Silvers will host a panel discussion with leading experts to explore this further.

Join us for the final talk in the Climate Change, Labour and Innovation Lecture Series 2022 to hear Professor Silvers discuss 'how policymakers should think about the wickedest problem of all'. For this final event in the series, Professor Silvers will be joined in conversation by Hilary Cottam OBE, social entrepreneur and Honorary Professor at the UCL Institute for Innovation and Public Purpose (IIPP) and Sarah Lunnon of Just Stop Oil and ex Extinction Rebellion political spokesperson.

The discussion will bring the perspectives of the environmental movement and innovation scholarship to bear on the thesis of the lectures—that neoliberal approaches to addressing climate change have failed, and that we need much more aggressive government action, action that can only happen that with the real political and social support of working people, particularly in directly affected industries. That in turn requires a different kind of approach to working people by political leaders—one characterised by leadership by political leaders in terms of goals, engagement with working people in terms of policies, and money to fund both transition and new investment on a scale more associated with wartime than with prior policy approaches to climate change.

The lecture will be presented by Professor Damon Silvers. 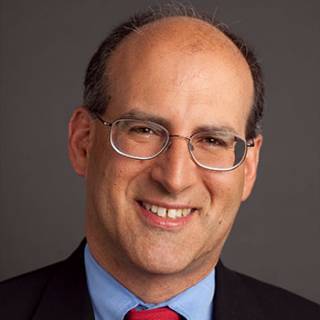 Professor Silvers was a member of the Biden-Harris Administration transition teams for Financial Regulatory Agencies and for the Treasury Department in 2020-2021, and served as the Deputy Chair of the U.S. Congressional Oversight Panel for the Troubled Asset Relief Program, commonly known as the Bank Bailout, from 2008-2011. He has helped represent the U.S. labour movement at the UN COP, the OECD and the G-20 on numerous occasions, and has published extensively on financial regulation, labor law and public investment issues. Damon is also a Visiting Professor at the University of Newcastle.

Professor Silvers earned his Doctor of Laws from Harvard Law School with honors, his Masters of Business Administration from Harvard Business School with high honors and is a Baker Scholar, and received his bachelors degree from Harvard College with highest honors. He also read history at Kings College, Cambridge. 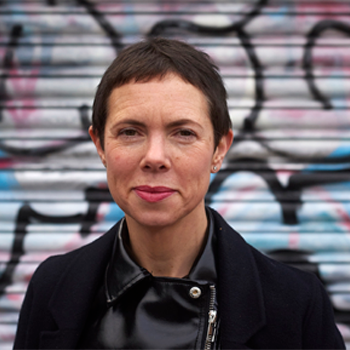 Hilary Cottam OBE is an internationally acclaimed author, innovator and change maker. She combines new thinking with radical, concrete practice. She holds a PhD in social sciences and is an Honorary Professor at the Institute of Innovation and Public Purpose at UCL. Hilary started working in Northern Ethiopia in the late 1980s, embedded within the areas held by the Tigrayan People’s Liberation Front, supporting the work of famine relief. She later worked in the Dominican Republic on a range of community projects, returning to the country  to live for extended periods in the barrio of La Ciénaga as part of her doctoral research. In the mid 1990s Hilary worked for the World Bank, based in Washington D.C. but travelling widely with responsibility for urban poverty in Southern Africa.

Returning to the UK in 1998 Hilary started the social enterprise School Works Ltd to transform approaches to school design, integrating new thinking on learning with the design of infrastructure in a  low cost approach.  She started the Do Tank Ltd to extend the work into prisons developing a new, affordable prison design which would accommodate a regime proven to reduce re-offending.  As a Director of the Design Council she created the pioneering RED Unit which developed design led approaches to public service reform. In 2006 Hilary started Participle a ten year experiment to develop new models of welfare in collaboration with communities and local government across Britain.

Hilary was named UK Designer of the Year in 2005 for her pioneering approach to social design and in the same year was recognised by the World Economic Forum as a Young Global Leader for her work in the field of social change. Throughout her work, Hilary combines new thinking with the development of working methods that enable deep participation. Influences include the methods of Rapid Rural Appraisal, her studies in anthropology, feminism and psychoanalysis and her collaboration with designers.

Hilary’s first book Radical Help was published to acclaim by Virago/LittleBrown in 2018. In 2019 Hilary moved into a new studio at Peckham Levels to develop the next stage of her work and practice. Her work has been widely written about from Wired to Rolling Stone magazine and featured in international design exhibitions in London, Vienna and New York. In 2019 Hilary was honoured with an OBE for services to the Welfare State. She is a Trustee of the Joseph Rowntree Foundation.