Competition without borders? International governance of the digital markets' competition 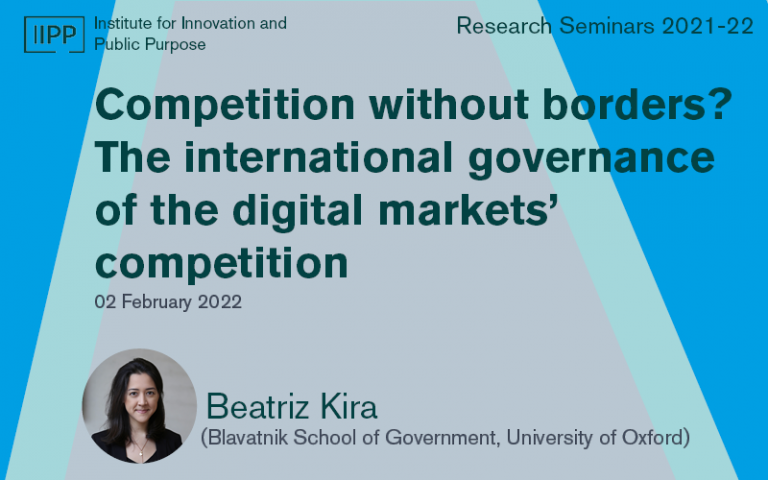 Join us to hear Beatriz Kira talk about her research on 'Competition without borders? International governance of the digital markets' competition'. This talk will be chaired by IIPP’s Antonio Andreoni with a discussion from Rainer Kattel, Deputy Director and Professor of Innovation and Public Governance (IIPP). Followed by questions from the audience.

The size and the concentration of power held in the hands of a few technology companies have been raising public policy concerns and have led stakeholders across the world – including regulators, government officials, academics, as well as legal and economic practitioners – to propose regulatory measures to protect and promote competition in digital markets. In light of the proliferation of competition regimes operating worldwide, the global footprint of technology companies, and the shared nature of the competition challenges that emerge from the digital economy, there are issues that necessarily have an international dimension. Yet, most of the discussion so far has focused on the domestic challenges posed by competition in digital markets, and not enough attention has been paid to the international dimension of the problem and of the solutions.

This seminar will explore Beatriz Kira’s recent research of the regulation of digital competition from an international dimension and the inefficiencies that may arise when different jurisdictions adopt uncoordinated measures to deal with similar problems, including externalities for companies and other countries (e.g., spill over effects that some proposals can have in other jurisdictions) and the challenges to the enforcement of some of the new regulatory proposals.

Based on illustrative cases that have been decided in more than one nation, and on rulings and regulations that have spill-over effects across jurisdictions, the paper focuses on three key cross-border competition challenges that emerge from (or are accentuated by) the digitalisation of the economy:

The paper also discusses the institutional challenges that would need to be considered when considering the implementation of a more coordinated international approach, including matters related to enforcement, asymmetry of powers between developed and developing nations, and whether there is a need for a multi-lateral institution to govern competition. The paper concludes by arguing that serious consideration of the international dimension of digital markets competition is not only required to avoid unwanted externalities, but also to render platform regulation more effectively and fit for purpose. 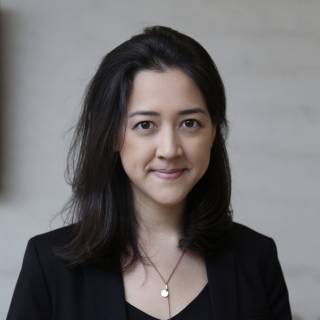 Beatriz is a lawyer and a social scientist by training, holding a PhD in Economic Law and Political Economy from the University of São Paulo, and an MSc in Social Sciences of the Internet from the University of Oxford. Her research focuses on the governance of digital technologies, and the regulatory and policy frameworks to supervise the economic power of technology companies.

Beatriz is a Research Affiliate of the Law and Public Policy research group at the Faculty of Law of the University of São Paulo, and is enrolled with the Brazilian Bar Association (OAB). She has previously acted as a consultant for the Brazilian Competition Authority (CADE), and conducted research for several academic institutions, including the Oxford Internet Institute (OII), the Brazilian Network of Empirical Legal Studies (REED), and the Brazilian Institute of Applied Economic Research (IPEA)