Rethinking employment: The case for a job guarantee 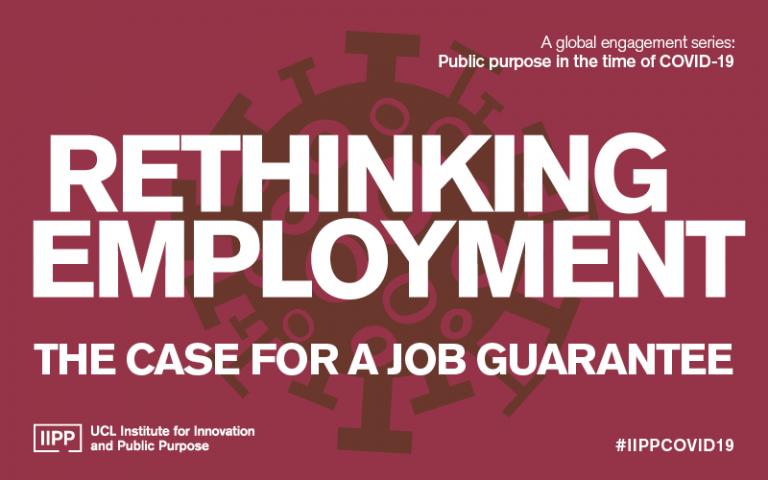 Join the UCL Institute for Innovation and Public Purpose (IIPP) as we discuss the idea of a public job guarantee scheme, and considers how it could help us recover from the pandemic and support a Green New Deal with leading experts Aurore Lalucq, Robert Skidelsky and Pavlina Tcherneva, chaired by Josh Ryan-Collins.

The COVID-19 pandemic has created job losses and employment-preserving interventions by governments on a scale not seen since the Great Depression of the 1930s.  But even before the pandemic, the consensus that a level of unemployment was a necessary evil in order to prevent inflation was being challenged. In this event, we will debate the idea of a public job guarantee scheme and consider how it could help us recover from the pandemic and support a Green New Deal. We’re joined by three international experts on these topics from the U.S., Britain and France.

This event will be live-streamed via Zoom. Please sign up using the link above.
Please note there are limited virtual seats available for this event. We will also be live-streaming the event on YouTube, so please follow IIPP on Twitter @IIPP_UCL where we will be sharing the YouTube link on the day of the event if you are unable to register for a ticket.
A recording will be available to watch online after the live event. 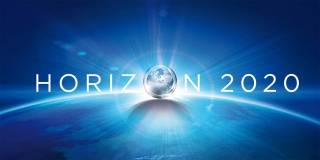 A global engagement series: Public purpose in the time of COVID-19

Hosted by the UCL Institute for Innovation and Public Purpose (IIPP), this virtual events series will ask the questions: What ​is ‘public purpose’ in the time of a global pandemic? What is the role of the State in shaping a social and economic recovery with a new directionality? Throughout the series, IIPP will be in conversation with leading global thinkers on today’s most pressing challenges, from the macroeconomic policy response to the effectiveness of different public governance solutions and civic engagement experimentation.

This series will also explore how to give public purpose to powerful digital technologies and rebuild more resilient economic systems and institutions, as well as what is needed across emerging economies to avoid spiralling into more debt and inequality.

The current global COVID-19 crisis is a wake-up call for a new public purpose which works for a more inclusive and sustainable global society.

More information about the series

Member of the European Parliament 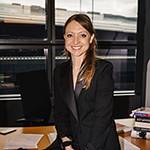 Aurore Lalucq is a French economist and politician who was elected to the European Parliament in 2019. She has been a strong voice for a European Green New Deal agenda and for the adoption of new wealth indicators which factor in social and environmental concerns. Within the European Parliament, she serves on the Committee on Economic and Monetary Affairs and the Delegation for relations with the United States. She is also a member of the European Parliament Intergroup on LGBT Rights and the Responsible Business Conduct Working Group. Aurore is the author of several books, including Faut-il donner un prix à la nature? (Should we give a price to nature?) (2015) with Jean Gadrey which won the 2015 book prize of the Fondation de l'Écologie Politique. She co-founded the think tank Institut Veblen with the aim of producing ideas to put the economy at the service of ecological and social goals. @AuroreLalucq | More about Aurore Lalucq 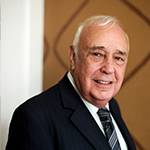 Robert Skidelsky is one of Britain’s foremost economic historians and a key voice in contemporary economic and political debates. His special expertise is in the historic role of fiscal policy in advanced economies and the rise, fall and return of Keynesian economics. He is the author of many books, including his famous three-volume biography of John Maynard Keynes (1983, 1992, 2000) – winner of five literary prizes – and, most recently, Money and Government: A challenge to mainstream economics (2018) which makes the case for putting theories of money and government at the centre of economics. In 1991, he was made a life peer in the House of Lords. Robert has dedicated great effort to increasing public understanding of economic issues, writing many articles in free publications and creating an open online course in partnership with the Institute for New Economics Thinking on the history and philosophy of economics. @RSkidelsky | More about Robert Skidelsky 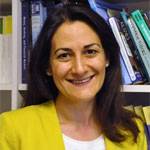 Pavlina R. Tcherneva is an American economist specialising in Modern Monetary Theory and public policy. Her book The Case for a Job Guarantee (2020) makes the argument for a permanent policy that guarantees voluntary employment opportunities in public service for all who need them. In 2006, she was a visiting scholar at the University of Cambridge from which she developed an interpretation of Keynes’ approach to full employment which was recognised by the Association for Social Economics with the award of Helen Potter Prize (2012). Currently, she is also a Research Scholar at the Levy Economics Institute, New York. Pavlina has worked with policy makers across the world on designing and evaluating employment programmes and frequently speaks at central banks on Modern Monetary Theory and macroeconomic stabilisation policies. She also worked with the Bernie Sanders 2016 Presidential Campaign. @ptcherneva | More about Pavlina Tcherneva

Head of Finance and Macroeconomics, and Senior Research Fellow at UCL Institute for Innovation and Public Purpose 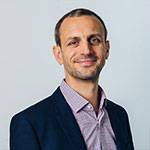 Josh Ryan-Collins is Senior Research Fellow in Economics and Finance at the UCL Institute for Innovation and Public Purpose (IIPP). His research focuses on the interaction between finance and the macroeconomy with a particular interest in the land market and environmental sustainability.  He is the author of three books, two co-authored: Where Does Money Come From? (2011), Rethinking the Economics of Land and Housing (2017) and Why Can’t you Afford a Home (2018, Polity). He was previously Senior Economist and Head of the Finance program with the New Economics Foundation (NEF), one of the UK’s leading progressive think tanks. @jryancollins | More about Josh Ryan-Collins (chair)