The public purse: a government budget is not a family budget …and why this matters 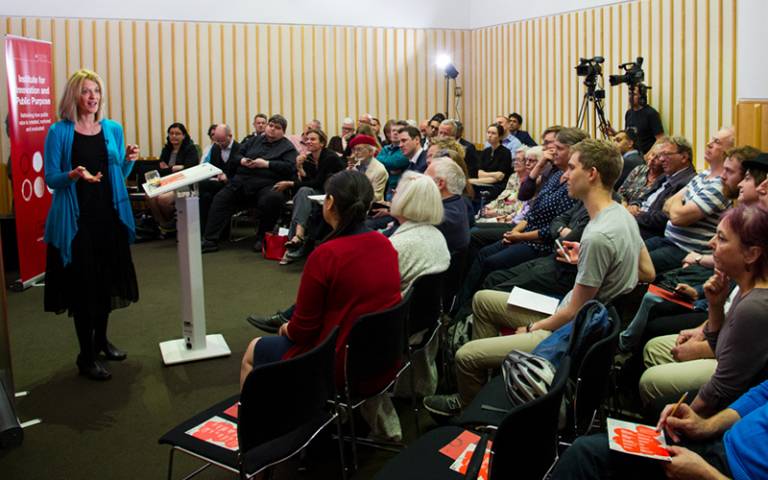 Stephanie Kelton gives an insight on mission-oriented budgeting and where money actually comes from, as part of as part of our public lecture series Rethinking Public Value and Public Purpose in 21st-Century Capitalism.

This event has taken place, but you can watch it below.

Drawing on her experience as the Chief Economist on the U.S. Senate Budget Committee, Stephanie Kelton will give a beginner’s class on public deficits and what (almost) everyone is missing in the debate over the government’s budget. Is the government’s budget really just like a family budget? (Teaser: It’s not!) What is the purpose of budgeting anyway? Is it to balance spending and revenue, or is targeting a balanced budget the wrong goal altogether? Is the British government living beyond its means?

Stephanie will outline a new way of understanding deficits, debt, taxes, the relationship between the public and private sectors, and what our economy could look like. Turning the public budget into a participatory, mission-oriented endeavor Is critical to restructuring public services and public investment and building the kind of economy that will deliver a cleaner, safer, more secure future for all.

Stephanie Kelton, Ph.D. is Professor of Economics at the University of Missouri-Kansas City. She served as Chief Economist on the U.S. Senate Budget Committee (minority staff) in 2015 and then became an Economic Advisor to the Bernie 2016 presidential campaign.

Photos of the event are available to view on our Flickr.