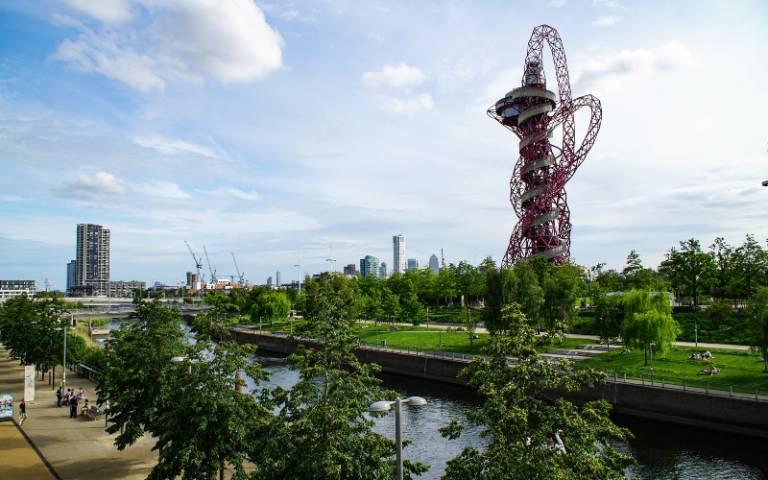 A new ten year study will observe how households in 13 post-industrial neighbourhoods in east London self-report their prosperity over the decade 2021-2031.

The study is mainly focused on neighbourhoods that have been directly impacted by the regeneration of London's Queen Elizabeth Olympic Park and Royal Docks. Self-reporting will enable the IGP to accurately assess the long-term effects of social, economic and physical change on individual and community prosperity, with the first findings due to be published ahead of the tenth anniversary of the London Olympics next year.

The study will challenge the established view that individual prosperity only increases in line with job creation and economic growth, and is the first in the UK to track household prosperity using the Institute for Global Prosperity’s (IGP) localised citizen-led ‘Prosperity Index’. Over ten years the study will produce robust, actionable, and local evidence about prosperity as it is felt by people, rather than centrally determined targets for the number of houses built or jobs created.

The Olympic Legacy regeneration aims to share the benefits more evenly by closing the gap in prosperity and prospects between the poorest parts of east London and wealthiest areas of the city. However, the IGP study will be the first-time people - rather than abstract metrics - have been used to evaluate the impact of regeneration.

Levelling up and place-based prosperity have become policy priorities for national, regional and local government in the UK in recent years, however the approaches to achieve prosperity are heavily dependent on the same traditional macroeconomic interventions that have created the growing regional and intra-urban inequalities and social and economic exclusion.

The study is led by the Prosperity Co-Lab (PROCOL) UK and is an innovative cross-sector research collaboration including partners and funders from the public, private and voluntary sector and is supported by the Centre for Longitudinal Studies at UCL. The main funders of the study are Lendlease, Royal Docks, The London Legacy Development Corporation, Poplar HARCA and The Hill Group.

We need a redefinition of prosperity that is less concerned with economic wealth and growth, and more attentive to the things that people care about and need – secure and good quality livelihoods, good public services, a clean and healthy environment, planetary and ecosystem health, a political system that allows everyone to be heard, and the ability to have rich social and cultural lives.”

Professor Henrietta Moore, Founder and Director of the IGP

“ I wanted to be involved in this because too often it feels like assumptions are made about what is needed to improve the lives and livelihoods of people in communities like mine. This study takes a different approach. It starts by asking people what prosperity means to them and using that information to inform policies and projects to enable local people to flourish and thrive”.

Involving local people to develop the Index has established a new way to understand, conceptualise and measure prosperity, inform local decision-making and equip communities with the tools and evidence they need to monitor progress and hold decision makers to account.

The study will address the following questions:

Photo by Tom Wheatley on Unsplash